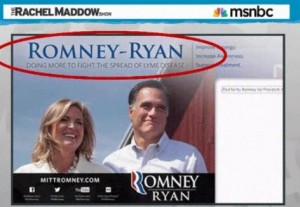 Political observers, Romney critics, and even President Obama’s reelection campaign have been having fun with Mitt Romney’s ultra-targeted direct mail piece promising Virginia voters a sturdy effort in the fight against Lyme Disease. At first, the derision centered around the absurd specificity of the mailer’s target audience (Rachel Maddow even offered an apology in advance if it turned out to be a fake), but has now expanded to include accusations that the Romney/Ryan campaign is pandering to Lyme Disease Truthers and promoting quackery.

But it turns out, there’s more to it than that. Laura Helmuth explained over the weekend that there are niche conspiracy theorists on this issue in Virginia, and in classic dog-whistle fashion, Romney’s appealing to them by speaking their language.

Let’s play doctor. A patient comes to you with joint pain, difficulty concentrating, anxiety, poor attention, and mood swings. You might run a series of tests to rule out a persistent infection or other disorder. If your patient lives in a tick- and Lyme-disease-infested area, you would be wise to test for the bacterium Borrelia burgdorferi and, if detected, prescribe a course of antibiotics. But suppose the tests come back negative and there is little evidence that your patient was bitten by a tick or was infected with the Lyme disease bacterium. If you are a good doctor, and you are, you might explore a diagnosis of depression, a disease that afflicts almost 10 percent of the population at any given time.

If you are a doctor who believes that the CDC and NIH have misrepresented carefully vetted clinical trial data about the diagnosis and treatment of Lyme disease, however, you might diagnose your patient with chronic Lyme disease and prescribe an intensive, long-term, side-effect-laden, mega-dose of antibiotics.

And who would be the biggest supporter of your and your patient’s right to pursue a worth-testing-but-found-wanting treatment? Mitt Romney and Paul Ryan.

There is no doubt that tick-borne illnesses in Northern Virginia are a serious public-health issue, but the Romney mailing, and its promises of “improved synergy,” appears to be more political than medical. As Helmuth added, the direct mail seems to suggest, “Forget the science, just channel your legitimate fear of a dangerous disease and your misguided fear of the medical establishment into a vote for us.”

Whether you believe in Chronic Lyme Disease or not, though, the most absurd part of Romney’s mailer ought to be the fact that, even when he’s getting this specific, he doesn’t really get specific. The mailer promises to “Improve Synergy,” the kind of meaningless phrase that would get mini-muffins thrown at you in any conference room in America, and which the mailer explains means Romney will “Ensure that government agencies have an open line of communication and work with patients, researchers, doctors, and businesses in an objective, comprehensive manner.”

Wait, what? Government agencies have wonky phone lines? Or is Romney saying that he will personally moderate communications about Lyme disease? That seems like a time-consuming job for a president.

Support awareness how? So far, there’s no promise of funding, or planning, or specific action of any kind. Technically, he’s already supported awareness by sending out that flier.

Then, under the heading “Support Treatment,” Romney explains the one and only thing he will actually do for people who suffer from Lyme disease (or chronic Lyme disease): make it harder for them to sue doctors who injure or kill them:

Encourage increased options for the treatment of Lyme Disease and provide local physicians with protection from lawsuits to ensure they can treat the disease with the aggressive antibiotics that are required.

Did you catch that? Romney will encourage doctors to spitball Lyme Disease treatments, then make it impossible for you to sue them if one of those treatments turns out to be quackery, all while throwing millions of Americans off of their health insurance.

Even if you’re hyper-engaged on the topic, and totally believed that the medical establishment is missing the boat on this chronic Lyme Disease thing, especially if you believe that, Mitt Romney’s mailer is evidence only that even on such a specific issue that he brought up, his campaign still can’t offer specifics.