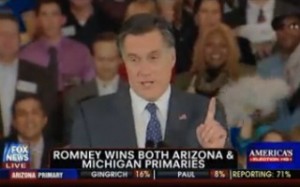 The Blunt amendment sponsored by Sen. Roy Blunt (R-MO) would allow any business owner to refuse to offer employee health services and coverage for items that conflict with their “moral” or religious beliefs. Clearly the battle between women’s rights and religious liberty is continuing to heat up. Mitt Romney has something to say about it, actually two things. More on that later.

Critics of the bill claim that President Obama’s religious exemption compromise allows for a common-sense way for religious organizations to opt-out of providing coverage they morally object to. Blunt supporters say the exemption is basically just an “accounting gimmick,” because while it does allow for women to purchase contraception directly from their insurer and not inside their health plan, it does not take into account religious organizations that act as their own health insurer.

Interestingly, religion is the one area where Romney has steadfast credibility. At age 34 he was a bishop in the Mormon church and later even rose to stake president, a position similar to leading a Catholic diocese, according to the New York Times. He also counseled parishioners on a variety of personal and sensitive topics, including abortion, divorce, adoption and addiction. Moreover, Romney’s religious roots go back — way back, all the way to 1837 when his grandfather became affiliated with the Mormon prophet Joseph Smith.

So in a contested debate about contraception and religious liberty, one would expect Romney to be a sober voice of guidance and leadership capable of empathizing with the various stakeholders while also standing resolutely behind a common-sense decision. And what would that resolute decision look like?

Flip-flopping for a Cause

When asked by an interviewer if he would support the Blunt Amendment, Romney said:

“I’m not for the bill, but look, the idea of presidential candidates getting into questions about contraception within a relationship between a man and a women, husband and wife, I’m not going there.”

First, that would be a credible answer if it weren’t for the fact that, yes, the Blunt Amendment is pending in Congress and does exactly what Romney suggested and if he were in the White House there would be a chance of it reaching his desk. So while Romney may object to a reasonable question, I’m sure many more, including those women who would potentially be affected, would object to his not answering whether he would sign the bill or veto it.

Second, Romney has talked numerous times about repealing laws (something he cannot do as president) but has an issue talking about what would be solely under his purview (signing bills into law)? It doesn’t make any sense. And it gets worse.

Later, Romney’s campaign clarified the issue, by blaming the interviewer. “[T]he interviewer’s question was phrased in a confusing manner – the reporter said the bill ‘bans’ contraception, when in fact it just allows employers to ‘refuse’ providing treatment,” said the Romney campaign.

It’s easy to perceive this as just another flip-flop by Romney, a guy with less of a chance of emanating political conviction than Jerry Sandusky has running a daycare center. But that’s really not it. At least not this time. What scares Romney more than being a flip-flopper is being perceived as what he is: Mormon.

22% of Americans would not vote for a Mormon if he were their party’s nominee, according to Gallup. And that number hasn’t changed much since the question was first asked in 1967. By comparison, the last time the same number of Americans, 22%, said they wouldn’t vote for Blacks or Jews was 1971 and 1961, respectively. And now the number of American who would vote for either group is in the single digits.

After Romney won the Nevada caucus, taking 9 of 10 Mormon votes where Mormons represent 26% of caucus-goers, his campaign was quick to send out a press email highlighting the “wide range” of support Romney received from all demographics. While it’s true that Romney would have still won handily (by 17%) without the Mormon votes, having a clear-cut advantage among one group sure doesn’t hurt. In fact, Nevada was Romney’s strongest win yet.

Unfortunately for him, it was propelled by his biggest weakness.