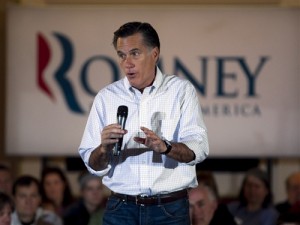 Presumptive Republican nominee Mitt Romney has taken to offering voters history lessons about recent presidents as of late, first noting that “even Jimmy Carter” — perhaps our most leporiphobic former president — would have give the order to raid Osama bin Laden’s Pakistan compound and even asking a crowd in Virginia, “Who would’ve guessed we’d look back at the Carter years as the good ol’ days, you know?”

Now, Romney is focusing on none other than Bill Clinton — as in, the same Bill Clinton being embraced by Obama’s re-election campaign in the hopes that he’ll help raise more funds.

In seeking to drive a wedge between centrist and liberal Democrats, Romney spoke in glowing terms of the Clinton era, taking a mantle that had been carried throughout the GOP presidential primaries by former rival Gingrich.

But Romney didn’t mention Gingrich, who was House speaker during the mid-‘90s and who has also laid a claim to that decade’s economic boom.

“President Obama chose to apply liberal ideas of the past to a 21st century America,” Romney said. “Liberal policies didn’t work back then, they haven’t worked during these last four years, and they will not work in the future. New Democrats had abandoned those policies, but President Obama resurrected them with the predictable results.”

He continued: “President Clinton, remember, he said the era of big government was over. President Obama brought it back with a vengeance. Government at all levels now consumes about 38 percent of the economy, and if Obamacare is installed, that will rise to about half of the economy.”