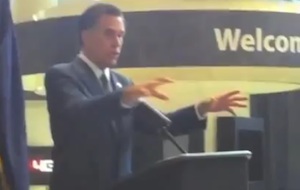 While speaking at an event in Pittsburgh, Mitt Romney said he questioned the science behind global warming and opposed climate legislation. “‘My view is that we don’t know what’s causing climate change on this planet,” Romney said. “And the idea of spending trillions and trillions of dollars to try to reduce CO2 emissions is not the right course for us.”

“I do not believe in a cap and trade program,” Romney added. “By the way, they do not call it America warming, they call it global warming. So the idea of America spending massive amounts, trillions of dollars to somehow stop global warming is not a great idea. It loses jobs for Americans and ultimately it won’t be successful, because industries that are energy intensive will just get up and go somewhere else. So it doesn’t make any sense at all.”

The green blogosphere assailed the former Massachusetts governor for flip-flopping positions on the issue, calling out Romney for changing positons yet again on climate change. ThinkProgress’s Brad Johnson noted that Romney made a completely opposite statement in June: “I believe that humans contribute to that,” Romney said. “I don’t know how much our contribution is to that, because I know that there have been periods of greater heat and warmth in the past but I believe we contribute to that. And so I think it’s important for us to reduce our emissions of pollutants and greenhouse gases.”

Grist’s Christopher Mims also slammed Romney. “If there’s one thing Mitt Romney’s good at, it’s turning directly into whatever political winds are blowing through the Republican base.”

While 97% of climate scientists agree that human activity is causing climate change, Romney perhaps read a recent Reuters poll that showed 43% of Republicans (and 49% of tea party members) believe global warming is the result of natural causes.

Watch Romney criticize cap and trade legislation below via ThinkProgress: