Move Over Sarah, The ‘Hillary For President’ Drumbeat Has Begun 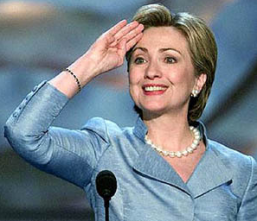 The rehabilitation of Hillary Clinton has been interesting to watch, and will likely get more so if this is any indication. An op-ed in today’s Wall St. Journal by Pete DuPont is making the case that Hillary Clinton could launch a formidable campaign against incumbent President Barack Obama in 2012.

The question of whether Hillary plans on making another White House run has been casually bandied about since her hard fought 2008 campaign against Obama, but this is the first time I can recall seeing it in a serious publication…though I strongly suspect it will not be the last. The speculation this time around comes as a direct result of Obama’s plunging poll numbers (Hillary, by contrast, rates 45% favorable and only 35% unfavorable) and the approaching mid-terms, which even Press Sec. Robert Gibbs is none too optimistic about. Neither of these things, of course, are remotely new challenges for a incumbent president to face — Bill Clinton in 1994 is obviously the first example to spring to mind. What is new, however, is the wave of euphoria that Obama swept into office on, making this plunge all the more dramatic. But also: Sarah Palin.

First, here are the reasons DuPont thinks Hillary would be a good choice for the Dems:

She is one of the most experienced prospective candidates the Democratic Party has had in a long while: wife of a governor, U.S. first lady [nice that these attributes are now considered boons], senator and now secretary of state. This is a good record to run on as someone who knows how the government works.

Fourth, she is an experienced foreign-policy adviser who understands the threats to our national security: unresolved conflicts in Afghanistan and Iraq, rising threats of nuclear capability in Iran and North Korea, and uncertainties in Pakistan.

Fifth, experience will be even more important to voters in the 2012 presidential election, whose 2008 gamble on someone with little experience is proving costly.

All good strong, reasons, and ones that are notably lacking on the GOP side. Ironically, what DuPont neglects to include is the fact that Hillary’s a woman could also be a huge selling point, particularly now that Sarah Palin has been banging the Mama Grizzly drum so consistently.

It’s not a secret that Palin of late has been ingeniously cashing in on those 18 million cracks in the ceiling Hillary so notably inspired in 2008. In fact, lest we forget, in the beginning that was Palin’s reason for being: to allow the McCain campaign to capitalize on all those women votes. In the interim however she’s built (in ways no one could have anticipated) enough national clout to be widely considered the GOP’s strongest candidate for Oval Office, which may say as much about the roster of GOP candidates as it says about Palin — who I am still not convinced actually wants to be president — but nevertheless she’s a force to be reckoned with. Likely absolutely nothing could take the wind out of those sails faster or more permanently than Hillary Clinton. A hypothetical I imagine the media is going to harp on in the next few months: could there be a greater gift to the calbers and blogosphere than a Clinton vs Palin election year?

Mind you, there’s also the question of whether Hillary Clinton wants to be president still, or would consider launching a campaign against an incumbent from her own party (the last person to seriously do so was Pat Buchanan in 1992); one imagines Obama’s poll numbers would have to be rock bottom to justify such a decision. And even then it would be tough.

Of course, it’s still early and plenty could happen in the next 12 months that would entirely change the national political stage: the hole could be plugged, the economy could rebound. That said, the media started beating the Obama drum shortly before the 2006 midterms so perhaps it’s not that early at all, if the 2008 political season is anything to go by — and granted Bush was not an incumbent — the presidential debates should begin sometime next April.