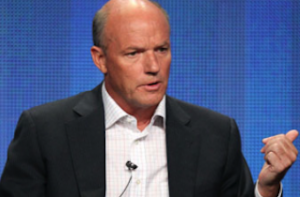 MSNBC has faced some serious ratings woes this year, with not as many people tuning in as they did during the 2012 election. Network president Phil Griffin defended the network in an interview with Variety, arguing that all this breaking news over the past few months (big trials and royal babies among them) is good for CNN, because that is the network made for breaking news, a battle that MSNBC gave up two months ago.

You’ll recall that Griffin conceded in June that MSNBC is “not the place” to go if you’re looking for breaking news. This was highlighted well by Variety‘s Brian Steinberg, who made this important point about the network’s new mission.

[W]hen big stories do arise, you need newsgathering muscle, not gum flapping. Activist Sharpton can’t do what Brian Williams does, and the more Maddow and Chris Matthews pontifi cate, the farther they get from being able to present news events in an objective fashion. Who is the face of MSNBC should terrorism cripple a major American city?

And whereas Fox News has a selection of anchors like Chris Wallace and Shepard Smith to go to for breaking news, MSNBC’s news anchors have seemingly become more comfortable inching towards the opinion side of the dial.

Griffin admitted to Variety he expected MSNBC’s weaker performance in a non-election year, saying, ““There has been an inordinate amount of big, breaking news, and that is, honestly, when CNN does well. It’s pure muscle memory.” He also made it clear that this doesn’t mean they’re going to change their mission at all.

The cabler will focus on getting past political malaise, he said. “There is a sense that America doesn’t do big things. We do, in some ways as much as ever. We have to find it.” Look for the network to dabble in digital community-building with a new website in the fall.

MSNBC came in dead last the night of the George Zimmerman verdict announcement and during the coverage of the Boston Marathon bombing, and this year they dropped to a seven-year ratings low. However, Griffin may be right that breaking news is really all CNN is good for, since ratings numbers show the network’s viewership plummeted after the Zimmerman trial was over.