Must Reads: Obama to Meet With Pope Francis, U.N. Retracts Iran Invitation to Syrian Peace Talks, and More
MUST READS 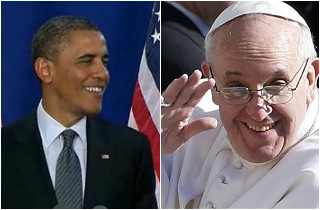 Every a.m., Mediaite publishes a primer of what the interweb machine is writing, talking, tweeting, and blogging about, so that you may fool friends and family into thinking you are a trove of information and insight. Today: Obama will meet with Pope Francis in March; the U.N. withdraws its invitation to have Iran join Syrian peace talks; France’s president is some very French-like trouble; and more.

President Barack Obama is one of the many figures to cite the eminently quotable and heterodox Pope Francis, but unlike the rest of us proles, Obama gets to meet with the man. The White House announced Tuesday that Obama’s European trip in March will culminate in a stop at the Vatican, where Obama will meet with the Pontiff just around Francis’ one year anniversary in the job.

“The president looks forward to discussing with Pope Francis their shared commitment to fighting poverty and growing inequality,” Jay Carney said in a statement this morning.

Cue Fox News segment on how much the trip will cost taxpayers in 3, 2, 1…

The U.N. has withdrawn its invitation to Iran to join the Syrian peace talks, one day after facing a near-collapse in the talks over Iran’s participation. U.N. Secretary General Ban Ki-moon said Iran’s professed lack of support for the plan to install a transitional government in Syria was what nixed the invitation—though he noted that he had been told Iran did support the 2012 plan, which means Iran may be talking out of both sides of its mouth (again.)

Speaking of which, the British Foreign Office finds that Iranian President Hassan Rouhani’s moderate image is, at least as far as human rights in his country are concerned, still just an image. A newly-released report found no improvement in the country’s “human rights situation” since Rouhani’s election last summer, despite his more pacific statements.

“The Iranian government continued to make positive public statements on civil rights issues, but there has been no sign of institutional change to improve the human rights situation, including for minority religious and ethnic groups, journalists and human rights defenders, prisoners and women,” the report said. “Although this is a welcome exercise, without changes to the law or the approach taken by the judiciary and security forces, there is unlikely to be any real change.”

The details of French President François Hollande’s tryst with a French actress are stunningly stereotypical, if such a combo is possible. Plus, catch the Eliot Spitzer-esque detail in footwear:

The magazine published pictures of him arriving for his trysts on a scooter, wearing a helmet with the visor down, but apparently recognizable by his sensible black lace-up shoes.

Liberal politicians should start wearing fuzzy bunny slippers or something. Anyhoo, the scandal imperils Hollande’s governance just as he was attempting to pull his socialist administration toward center and increase France’s global presence.