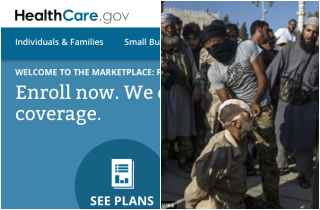 Every a.m., Mediaite publishes a primer of what the interweb machine is writing, talking, tweeting, and blogging about, so that you may fool friends and family into thinking you are a trove of information and insight. Today: Obamacare success stories; what the enrollment numbers do and don’t mean; why curtailing America’s military escapades could increase our global standing; and more.

WaPo talks to numerous people who have either been without insurance for years or were jolted off it recently when they changed jobs, and finds a lot of relieved people who procured affordable coverage through either the state or federal exchanges. The article is careful not to whitewash any of the website’s woes or scant on the still-unknown macro performance of the law. But it makes a fine case that Obamacare is helping the people it was intended to help. (Much to Howard Kurtz’s dismay).

As always, you should be reading TNR’s Jonathan Cohn for play-by-play analysis of the ACA. Cohn has a rundown of what the numbers do and don’t tell us. Most important, while the overall enrollment numbers are almost exactly 1/3 of projections for this point of the process (bad), insurers and officials are more concerned about the enrollment trends, which are rapidly increasing (good). Given the functionality of the website and gradual uptick in positive stories like the Washington Post article above, industry voices tell Cohn that enrollment could continue to surge up to the March 31 deadline.

Cohn also cautions that, like the Obamacare horror stories of a couple months ago that turned out to be more more complicated than they seemed, the Obamacare success stories will often come with caveats or unexpected twists (think deductibles).

Dan Drezner has a good thinkpiece up arguing that we’re conflating U.S. military action with U.S. global influence. Once you decouple the two, the narrative of “America’s waning influence” disintegrates pretty quickly:

The bigger error, however, has come from analysts confusing a U.S. reluctance to use military force in the Middle East with a decline in American power and influence. The truth is that the United States still wields considerable power, which is one reason why 2013 turned out to be such a good year. Whether one looks at global capital flows or the use of the dollar as a reserve currency, the data point in the same direction: the resilience of American economic power. And even as the sequester hits, the United States also continues to possess an unparalleled edge in military capabilities. It is true that Syria continues to hemorrhage lives and livelihoods. Even there, however, it was the threat of American force that triggered an agreement to remove Syria’s chemical weapons. U.S. military power has also helped to tamp down conflict in the Central African Republic, as well as deliver massive humanitarian relief to the Philippines.

Sarah Birke has an excellent, detailed breakdown of the quick rise of ISIS, the al Qaeda affiliate in Syria that is causing chaos in the country’s already bloody civil war. Birke charts the group’s beginnings in the aftermath of the Iraq insurgency, its nuanced differences with sub-group al Nusra, and its chilling disregard for any human life in pursuit of a Sharia-based transnational Islamic state—a ruthlessness that has cost it popular support among Syrians even as the group’s funds allow it to continue to recruit Syrian fighters. A good encapsulation of the centrifugal situation ISIS has engendered:

His view is symptomatic of how hostile many Syrians have become to outside powers, which, according to many opposition supporters, have done more harm than good by supporting the opposition just enough to continue the war, but not enough to ensure a decisive victory. When discussing ISIS with Syrians at the border, I often saw arguments break out. Some claimed that ISIS was better than other less devout groups because it was less corrupt (though there is some evidence of racketeering) while local criminals with guns steal cars and occupy houses. But I found hardly anyone who supported ISIS’s extremist vision of society. Most rebels and Syrians are prepared for a second war against ISIS, though they disagree whether to do so now or—assuming that happens—“when Assad goes.”