My Bad, Rand Paul Is A Hero For Democracy

My Bad, Rand Paul Is A Hero For Democracy 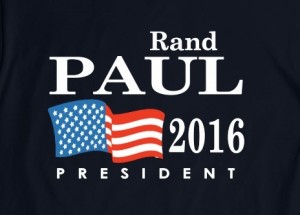 They say every dog has its day, but Senator Rand Paul (R-KY) has had at least a whole week. Political figures and media types from left, right, and center have all hopped aboard the Rand Paul Drone-i-buster Express, praising his 13-hour ode to Reynolds Wrap as everything from Constitutional Heroism to an Important Moment For Democracy From A Flawed Messenger. There have been a few liberal dissenters like Lawrence O’Donnell, Sen. John McCain, Sen. Lindsey Graham, and myself, but for the most part, the reaction has been universal (if heavily qualified) praise. I’m sorry, Lawrence, but I’ve changed my mind: Rand Paul is a hero.

The Rand Paul Qualified Love-In continued Saturday morning on MSNBC’s Up with Chris Hayes, as host and panel generally agreed that, despite the batcave-liner content of Paul’s 13-hour opus, the filibuster was a good thing because it got us all talking about drones. Because there was no discussion of drones before Wednesday. They also falsely agreed that Paul’s talking filibuster had extracted the answer to an “important question” from Attorney General Eric Holder, a question that Holder had already answered hours earlier.

Still, host Chris Hayes did get around to making several key points, like the fact that if all of this drone criticism is to mean anything, then Congress ought to do something about the magic beans that the program grew from, and repeal the Authorization for the Use of Military Force, or the fact that many of Rand’s fans could give a good goddamn if people get Hellfired at cafés in brown countries. In my view, these points, and Paul’s mostly-unhinged ravings, should have been the lede, and this flawed messenger garbage should have stayed in the deli case with the rest of the baloney. The four segments the show devoted to the subject are worth a gander, but the overall effect was to further enable the cult of Rand Paul, (Perhaps Flawed) Hero For Democracy.

The “flawed messenger” premise that liberals have embraced, the notion that Paul’s filibuster is inherently valuable because it “got us talking” about drones, is utter nonsense, unless we’re ready to lionize Sarah Palin’s “Death Panels” for getting us all talking about health care reform.

You see, Republicans had very little to be happy about following the last election, but one of them was that the 2012 GOP presidential field didn’t just lower the bar, it threw it into the Sarlacc Pit. Their trouncing with Hispanic voters then forcibly dragged them into the current century on immigration, and their 2016 field was looking to be somewhat almost kinda reasonable, which it needs to be in the face of the Hillary Clinton buzzsaw.

Now, with Senator Rand Paul “seriously mulling” a 2016 bid, the prospect of grassroots conservatives rallying to his side, booing Jeb Bush and Chris Christie at debates, and delivering primary victories to Rand Paul doesn’t seem so bad. That 13-hour filibuster will chop up nicely into some Hillary Clinton campaign ads. For those reasons, you can mark me down: I Stand With Rand.