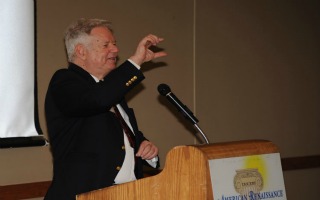 Less than one week after dropping John Derbyshire after he wrote a racially inflammatory post for an unrelated online publication, the National Review has had to let another contributor go over racist comments.

University of Illinois professor emeritus Robert Weissberg has been dropped from the roster of conservative commentators on the rolls at National Review. According to editor Rich Lowry, the editorial staff at NR became aware of a “noxious talk about the future of white nationalism,” and was forced to take action.

Unbeknownst to us, occasional Phi Beta Cons contributor Robert Weissberg (whose book was published a few years ago by Transaction) participated in an American Renaissance conference where he delivered a noxious talk about the future of white nationalism. He will no longer be posting here. Thanks to those who brought it to our attention.

Dylan Byers at Politico notes that Weissberg was speaking to the American Renaissance conference in Tennessee on March 19 about “viable alternatives” to white nationalism including the creation of “Whitetopias.”

“This approach to maintaining whiteness has the advantage that people can make a living catering to whites in their enclaves,” reads a recap of Weissberg’s speech on the conference’s website. “Prof. Weissberg went on to argue that liberals are beyond reason when it comes to race, that explaining the facts of IQ or the necessity of racial consciousness for whites “is like trying to explain to an eight-year-old why sex is more fun than chocolate ice cream.”

As the saying goes, “twice is a coincidence; three is a trend.” The ongoing house cleaning at National Review of contributors who regularly give voice to racially insensitive sentiments is contributing to the appearance of a trend.

National Review is home to some of the best and brightest political commentators in the business. Jim Geraghty’s “Campaign Spot” is unparalleled in its readability and is always jam-packed with information. Columnists like Jonah Goldberg, Kevin Williamson and the soon-to-be regular columnist and opinion writer for the Wall Street Journal, John Fund, are invaluable additions to the national dialogue. However, the recent scandal surrounding Derbyshire, now compounded by the addition of Weissberg to the dropped commentators list, is doing serious damage to the publication’s brand.

It is important not to paint the entire publication with the broad brush of racism, just as it is important not to minimize the significance of the past week’s events at National Review. They are cleaning house – that is appropriate. But they cannot afford anymore columnists to jump off the reservation. In that event, the implications for the future of the entire publication would be dire.