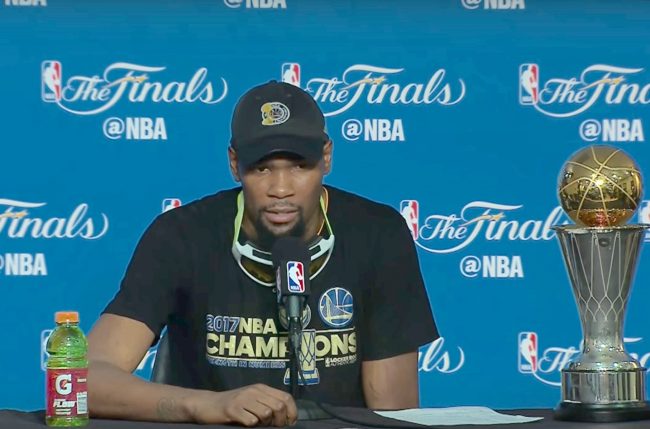 A White House invitation has not yet officially been extended to the NBA Champion Golden State Warriors. But recent tradition dictates that the Warriors will soon receive that invite. And one of the team’s biggest stars — not to mention one of the biggest stars in the NBA — already knows how he’ll respond.

According to ESPN, NBA Finals MVP Kevin Durant plans to skip the team’s trip to 1600 Pennsylvania Avenue — should they indeed go.

Durant went on to blame Trump for playing a major role in deteriorating race relations.

“It all comes from who is in the administration,” Durant said. “It comes from the top. Leadership trickles down to the rest of us. So, you know, if we have someone in office that doesn’t care about all people, then we won’t go anywhere as a country. In my opinion, until we get him out of here, we won’t see any progress.”

The Finals MVP added that he suspects the rest of the team will follow his lead. Individual athletes have boycotted White House ceremonies since Trump took office — including Tom Brady and a number of other New England Patriots. But no team has yet spurned a White House invite.