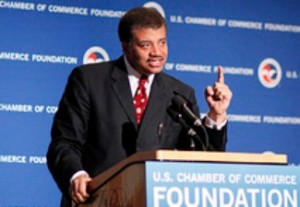 Pop phenomenon and Cosmos host Neil deGrasse Tyson gladdened the hearts of liberal geeks everywhere this week when he took to the comments section of a blog post by conservative talk show host Neal Larson in order to defend his honor against charges he mocked a 9 year-old girl.

It all started with a Tyson tweet during the Olympics:

The USA has 3x as many Olympic golds as Hungary, but 30x the population. Adjusting for this, Hungary is kicking our ass.

That didn’t sit well with Larson, who viewed Tyson’s observation as a “drive-by pot shot at America,” and Tyson himself as a “jackass” who “feels the need — like any good progressive — to smack America down to size.”

But it was the children, not America, for whom Larson really stood up:

I’ve listened to Neil deGrasse Tyson before. And what I observe is a smart guy who consistently enjoys asserting his intellectual supremacy over others more than he actually likes educating. In one of his worse moments, Tyson mocked a 12-year-old girl who suggested she’d like to live on Jupiter. He ridiculed her in the midst of a crowd, then later, several times, on Twitter. That told me everything I needed to know about Neil deGrasse Tyson.

For that moment he was just a horse’s astrophysicist.

Unfortunately, Larson was referencing this news item from Clickhole, which is The Onion’s Buzzfeed offshoot, which ironically lampooned the snarky liberal hero-worship that Larson finds so distasteful:

Awesome: When A Little Girl Told Neil DeGrasse Tyson She Wanted To Live On Jupiter, He Completely Shut Her Down

Get ready for the most incredible science win ever, delivered by none other than Neil deGrasse Tyson. He’s pretty much the king when it comes to shutting down people who peddle bad science, but this most recent case completely takes the cake: When an 8-year-old told the badass astrophysicist that she wanted to live on Jupiter, he completely shut her down using science.

Amazing! How many times can Neil deGrasse Tyson win the internet?

Larson’s blog post drew a lengthy comment from none other than Neil deGrasse Tyson, who epically punched down at Larson with this 550-word response:

First, I’ll forgive you for not spelling your name correctly.

Second, and more importantly, I don’t mind being labeled a horse’s astrophysicist (I see what you did there), provided it’s based on factual information. So what we must do is subtract the false information from your article, and then re-assess what name you choose to call me. If it still justifies “horse’s astrophysicist”, then so be it.

1) FYI: The cosmic perspective is all about having a second look at what, on the surface appears to be important, special, ego-boosting, etc. The Olympic medal count is not immune from this analysis. In fact an even better measure is medals per GDP per capita. This will tell you how efficiently and effectively a country is spending its wealth on athletic excellence. The Tweet, though based only on population, was a playful plea that we could be winning even more medals than we are.

2) I am agnostic, and actively disavow the atheist label:

3) People who deny human-induced climate change are badly misinformed. This position is neither politically Liberal nor Conservative. It’s factual. Although one could argue that all those who want to preserve the environment are the real conservatives in this discussion.

4) You use “Liberal” as a tag to characterize my politics. Since I have no active public political position, that’s a hard task to accomplish. Climate change deniers are misinformed. But so are people who think vaccines gives you autism. And so are people who think genetically modified foods are bad for you. These science-denying postures cross political boundaries, as I clumsily attempted to convey recently on Bill Maher.

5) The “incident” with a 9yr old girl never happened. It looks to be a hoax. No such tweets ever existed on November 29th, 2015, or on any other day. My only tweet on November 29, 2015 (as my followers can attest, and as anyone can see from scrolling my Twitter page was:

So you abrogated your journalistic integrity by not verifying what you read in somebody else’s article, before using it as a foundational pillar in yours.

6) I am 3x appointed by President George W. Bush, serving on commissions to advise him on the future of the American aerospace Industry, on NASA, and on the annual Presidential Medial of science winners. So your disapproval of my views is not shared by others on the conservative spectrum.

7) Lastly: my research output as a scientist is not hidden. You can find it here, if you are interested: http://www.haydenplanetarium.org/tyson/curriculum-vitae

So when you factor in (or simply subtract) all these elements from your writeup, If what remains still justifies labeling me a horses astrophysicist, then, as I said, I’m okay with that.

p.s. FYI: I have relatives who live in Idaho. And I’ve loved every visit. Last they visited me, prompted this Tweet:

Nephew from Idaho, puzzled by locks on my NYC apt door. I asked, Don’t you have locks at home? He replied, No, just Shotguns.