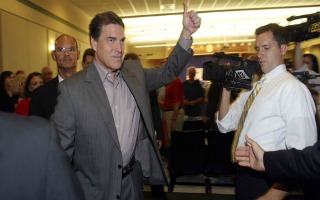 Texas Gov. Rick Perry’s ill-fated presidential campaign had its high points as well as its low points – among the more numerous low points were his repeatedly lackluster performances in this cycle’s myriad Republican presidential debates. Perry’s disappointing execution in the debates was characterized by consistently slow delivery, inconclusive assertions and one deeply damaging “oops.” However, his supporters claimed that Perry’s recent back surgery and his probable use of painkillers to aid in the recovery process could have marred his debate performance. On Monday, it was alleged in a book obtained by The Daily Caller that Perry was indeed on painkillers during the GOP debates.

“It became an open secret that he was using painkillers in sufficient dosages to keep him standing through the two-hour debates,” write the authors of “Inside the Circus.”

A source provided The DC with an advance copy of the eBook, authored by Mike Allen and Evan Thomas. The book comes out Tuesday.

The Daily Caller notes that an infamous press conference in which a visibly impaired Perry confused the entire press corps and most of the Granite State was likely the result of his use of pain relievers.

The authors imply that the painkillers may have led to a humorous incident before an October debate in New Hampshire when the “manager of a rival campaign” overheard Perry belting out the song “I’ve Been Working on the Railroad” while in the bathroom.

Perry denied using painkillers or alcohol prior to that press conference after a video of the presser went viral.

“This is such a cool state,” Perry told a New Hampshire crowd on October 28, 2011. “I mean, c’mon. ‘Live free or die.’ You gotta love that right? I come from a state, you know, where they have this little place called the Alamo and they declared, ‘Victory or death.’ We’re kind of into those slogans – ‘Live free or die.’ ‘Victory or death.’ ‘Bring it.’”

An aide to Gov. Perry is denying the allegations contained within Politico reporter Mike Allen’s book. The Daily Caller reports that former campaign communications director Ray Sullivan says the suggestion that the claims within the book are “false, unsubstantiated and ultimately harmful to the political and electoral process.”

The revelation that Perry may have been on painkillers at the time of this press conference and during the debates comes as a surprise to few. That loopy presser, Perry’s inability to focus during the debates as well as his seeming exhaustion towards the end of several two-hour debates clued many into the potential that Perry was self-medicating. Furthermore, few would blame him.

The Texas governor, having just endured spinal fusion and nerve decompression surgery in July, can be excused for reaching for the bottle of opioids to cope with the significant post-surgical pain if the allegations within the new book are proven true.

However, the governor’s decision to run for the highest office in the land immediately after such debilitating surgery, and during the pharmaceutical therapy phase of recovery, can certainly be called into question. The result of Perry’s presidential bid has been to set his public image back significantly. It may have eliminated any chance he could have of mounting a national comeback (something the Perry camp has intimated it is seriously considering).

Hopefully, Rick Perry is healing apace. His full attentions are required in the governor’s mansion in Austin. However, his impeded performance during his presidential bid has likely tarnished the Perry brand irreparably.

Watch the video of the infamous Perry press conference in New Hampshire from last October here: