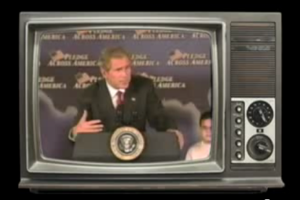 The DNC has just released a new ad on the economy, hinting at the bright future Democrats are securing for Americans currently and reminding voters that Republican policies “got us into this mess.” Whose Republican policies? George W. Bush, the president from two years ago. Miss him yet? Democrats are hoping for a resounding “no” on that question.

The ad is called “Big Choices,” and its peaceful narrator, subtle soundtrack, Middle America scenery and ample sunshine fits for the most part into the mold of “Morning Again in America” positive ads usually reserved for candidates promising change. The Democrats, however, are promising more of the same: “Do we continue to move forward?” asks the narrator, along with a barrage of questions similar such as “Do we put Main Street ahead of Wall Street?”

Then, with no real change in tone or indication that the future could turn ominous, President George W. Bush appears– and he’s got some sort of message for… someone: “You fool me, you can’t get fooled again.” It’s unclear what Bush’s point is here, as there’s absolutely no context, but it seems to be more of an obvious hint at Bush’s folksy style– the kind of hint most liberals will balk at and most conservative will blush at– and it’s a shot that takes for granted the fact that Americans really don’t like him.

If the point of the ad is to get Democrats riled up and out voting, bringing back the specter of George W. Bush has proven to be a fairly effective way of doing so. However, it also leaves the Democrats open to “blame Bush” criticism from the right, and if one is to judge by the sales of “Miss Me Yet?” t-shirts in Massachusetts (and the billboards earlier this year), this tactic is riskier than it was a year and a half ago.