We Will Not Be Silenced | Fox and Friends | Voter Fraud
video 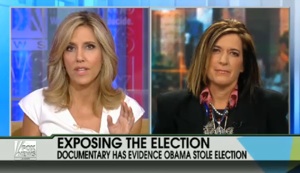 Amidst recent charges that the New Black Panther Party intimidated voters outside a Philadelphia polling place in 2008, a new documentary called We Will Not Be Silenced charges that this was not an isolated incident. The film’s director Gigi Gaston appeared on Fox and Friends this weekend and was introduced by host Alyson Camerota who claimed that “the 2008 primary race between Barack Obama and Hillary Clinton was rife with stories of voter intimidation and voting violations.”

This documentary is about the disenfranchising of American citizens by the Democratic Party and the Obama Campaign. We the People have made this film. Democrats have sent in their stories from all parts of America. We want to be heard and let the country know how our party has sanctioned the actions of what we feel are Obama Campaign “Chicago Machine” dirty politics. We believe this infamous campaign of “change” from Chicago encouraged and created an army to steal caucus packets, falsify documents, change results, allow unregistered people to vote, scare and intimidate Hillary supporters, stalk them, threaten them, lock them out of their polling places, silence their voices and stop their right to vote, which is, of course, all documented in “We Will Not Be Silenced.”

Right of center media outlets and websites have already begun promoting this film rather aggressively, ostensibly to delegitimatize the Obama administration. The director’s pedigree is noteworthy, particularly to those who are aiming to present the film as non-polemical – a lifelong Democrat and granddaughter of a former Governor of Massachusetts.

Gaston sits down with Fox and Friends and outlines a number of investigations of fraud, some footage of which is highlighted in the segment below.