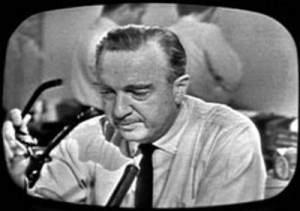 “Nobody wanted to go after Walter Cronkite,” writes Douglas Brinkley in Cronkite, his new biography of the beloved CBS newsman. The book — written with cooperation from Cronkite and his family — “dents his halo,” Howard Kurtz writes in The Daily Beast. Today, Cronkite’s stunts would have the likes of Kurtz himself calling for him to step down.

For starters, Cronkite cut a deal with Pan Am in the 1970s, furnishing worldwide travel for his friends and family. Everywhere from the South Pacific to Haiti. The “news division president, Dick Salant, was upset at what he deemed a blatant conflict of interest, but took no action against his star anchor.”

Cronkite’s image is, as Kurtz puts it, one with a halo. A “voice of authority in an age when we still revered, without a trace of cynicism, those who spoon-fed us the news.” But this biography shows that the man was more complicated and unethical than we know him to be.

Had Cronkite engaged in some of the same questionable conduct today—he secretly bugged a committee room at the 1952 GOP convention—he would have been bashed by the blogs, pilloried by the pundits, and quite possibly ousted by his employer. That he endured and prospered, essentially unscathed, until his death in 2009 reminded me of how impervious the monopoly media were in those days, largely shielded from the scrutiny they inflicted on everyone else.

“Nobody wanted to go after Walter Cronkite,” Brinkley says. Within CBS “he became a force of nature. He could almost dictate anything he wanted. He was the franchise.”

A liberal, Cronkite pulled stunts that made his political leaning abundantly clear. Meeting privately with Robert Kennedy, Cronkite told him, “You must announce your intention to run against Johnson, to show people there will be a way out of this terrible war.” Later, he had an exclusive interview with Kennedy, in which Kennedy left the door open for a possible run, announcing it three days later. “A major breach of trust,” Kurtz writes.

Kurtz’s full story is well worth reading in full, to get a better picture of Cronkite’s behind-the-scenes activity that would cause an outrage today (misleading editing, anyone?). But it’s a reflection of the times, Kurtz writes — and shows us how much we’ve changed over the years:

Brinkley’s book will undoubtedly tarnish the Cronkite legacy. But my admiration for the man is only partly diminished. Perhaps it is too easy to judge him by today’s standards, any more than we should condemn Thomas Jefferson for owning slaves. Perhaps he simply reflected his times, when some journalists and politicians quietly collaborated, when conflicts of interest were routinely tolerated, when a powerful media establishment could sweep its embarrassments under the rug.

Cronkite thrived, “always protecting what we would now call his brand,” Kurtz writes. “That’s just the way it was.”