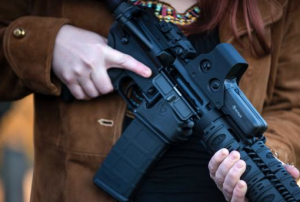 “Has technology rendered the 2nd Amendment to the US Constitution obsolete?” asked a New York Post editorial on Tuesday. In the wake of the shooting at Sandy Hook Elementary School, the newspaper called for reforming gun laws.

Questioning whether “the application of modern military design to civilian firearms produced a class of weapons too dangerous to be in general circulation,” the Post also offered an answer: Yes.

The editorial went on to argue…

But the fact is that the volume of fire produced by Lanza’s semi-automatic arsenal was substantively the same as the fully automatic “gangster guns” effectively outlawed by Congress in 1934 and again in 1968.

That ban did no real violence to the 2nd Amendment, so it’s hard to see how constraining the availability of high-tech military knockoffs would do so today.

Noting that there are “enough privately owned firearms in America almost literally to arm every adult citizen,” the editorial also pointed to the lack of political will to reform weapons laws. But that doesn’t mean it isn’t necessary.

“Weapons designed expressly to kill human beings, and then modified (wink wink) to meet the federal machine-gun ban, have no legitimate place in American society,” the paper argued, echoing the sentiment expressed by owner Rupert Murdoch. “Time to get rid of them.”

After the shooting, Murdoch took to Twitter to ask, “When will politicians find courage to ban automatic weapons?” Meanwhile, New York magazine reported that a fellow Murdoch-owned news outlet isn’t so keen on gun control talk.