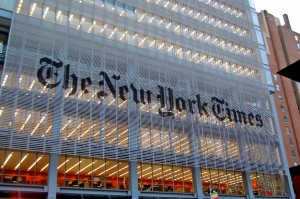 Margaret Sullivan hasn’t had an easy job of late. After all, in the wake of the terror attacks in France, the Public Editor of The New York Times is wading ​through​ a minefield of ethical and journalistic conundrums surrounded by passion, fury and even partisan politics. Most prominently for the Times is ​its​ decision not to publish any of the so-called “controversial cartoons” from Charlie Hedbo after 12 ​employees were slaughtered in their Paris offices by Islamic extremists. As the anointed standards deity for the Times, she is empowered to independently review all the journalistic decisions of its editors and writers, including this one.

But last week in a decidedly wishy-washy, ​rhetorical punt​, she pronounced the Times‘ decision, a “close call” and basically ​​aggregated what others had said on both sides of ​the​ free speech debate before concluding:

“The Times undoubtedly made a careful and conscientious decision in keeping with its standards. However, given these events — and an overarching story that is far from over — a review and reconsideration of those standards may be in order in the days ahead.”

Hmm. What else could possibly change “in the days ahead” to impact the decision on whether to publish the cartoons? Will the fundamental free speech questions evolve over time? Is there some ambiguity about what happened and why? Might we learn more details about what drove these terrorists to kill? One person who seems to have no doubt about what “precipitated” the attacks is ​Margaret Sullivan.

Today, at the end of a new column on mixing news and opinion, she states:

In the Public Editor’s Journal last week, I took up the question of whether The Times should have published the controversial cartoons that precipitated the murder of French journalists.

Merriam-Webster dictionary defines “precipitate” as: “​to cause (something) to happen quickly or suddenly.” Suggesting that there is a cause and effect to this sort of terrorism is precisely how terrorists hope their warped goals are defined, as a two-sided matter where certain actions lead to a justifiable reaction. Stating as fact that publishing cartoons “precipitated” an attack is dangerous business and Margaret Sullivan​,​ in particular, should know better.

Maybe just as important, it belies her previous contention that we may learn more in the days ahead that might change the equation for the Times in determining whether to publish the cartoons. There is no question we know what happened and why. Islamic extremists used murder and violence to instill fear in people and cultures they despise. That is not going to change.

Mediaite ​chose to publish the cartoons ​as part of our coverage​ of the attacks​.​ ​Regardless of how one comes down on that issue, what the Times and she, surely should not have done was buy into the terrorist​s​ narrative that the cartoonists​,​ and their work​,​ somehow caused their own deaths.​