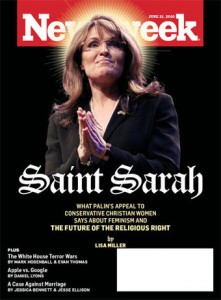 Photoshop is a nifty little tool. With the click of a mouse you can retouch a blemish or saw off a good chunk of someone’s hip bone. For the cover of their June 21 issue, the design team at Newsweek booted up the program to stick a shiny gold halo around Sarah Palin‘s head.

Below the heavenly photo of the former Governor, just underneath her prayer-clasped hands, sits a message scrawled across the page in Old English font: “Saint Sarah.”

The cover image is just the gimmicky precursor to an accompanying feature that goes even further with the Christian allusion, establishing Palin as the predominant female force in American evangelicalism:

“Even if she never again seeks elected office, her pro-woman rallying cry, articulated in the evangelical vernacular, together with the potent pro-life example of her own family, puts Palin in a position to reshape and reinvigorate the religious right, one of the most powerful forces in American politics. The Christian right is now poised to become a women’s movement—and Sarah Palin is its earthy Jerry Falwell.”

In essence, the article claims that Palin is doing something that has never been accomplished before by combining evangelical Christianity and modern feminism, and using the mash-up as a tool to (in Palin speak) “shore up” the traditionally weak female front of the religious right.

Feminist blog Jezebel is less than pleased with the discussion of Palin as a new feminist leader, comparing her affinity for the term “feminism” to a half-masticated banana chunk being repeatedly picked up and dropped by a greedy dog – confusing in summary, scathing in full.

Whether Palin’s influence is as powerful as Newsweek claims, the female presence in Republican politics has never been stronger – there are reportedly 96 Republican women looking to claim House seats this year, and conservatives Nikki Haley and Carly Fiorina each won their respective gubernatorial and Senate primaries.

With both Haley and Fiorina being blessed by a Palin endorsement before their wins, perhaps Saint Sarah really is the new patron saint that conservative women running for public office should light a candle to.