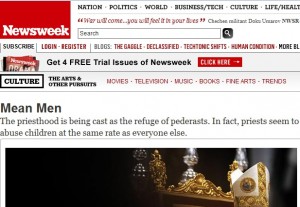 Last week, I marveled at the stunning pattern of collective denial that allows the Catholic church to continue to exist in its present form, despite a record of willfully harming children that now traces all the way to Pope Benedict XVI.

Today, I came across the latest example of this, as Newsweek has published an infuriating piece of propaganda (a web exclusive, probably because the paper caught fire every time they tried to commit it to print), designed to mitigate the Catholic church’s vile betrayals by distorting facts and by using the victims’ silence and defenselessness against them.

Let’s take a look at “Mean Men” by Pat Wingert: “The priesthood is being cast as the refuge of pederasts. In fact, priests seem to abuse children at the same rate as everyone else.”

Before I even get started, let’s take their (completely false) premise for granted. Wouldn’t it be reasonable to expect that child molestation would be a whole lot less common among priests? It’s the exact opposite of what a priest is supposed to do. This report is akin to taking comfort in the knowledge that Secret Service agents are just as likely to murder the President as anyone else.

But let’s just break this down. According to the poll Newsweek cites,  “64 percent of those queried thought Catholic priests ‘frequently’ abused children.” Newsweek rebuts those poor, misinformed souls handily: (emphasis mine)

Yet experts say there’s simply no data to support the claim at all. No formal comparative study has ever broken down child sexual abuse by denomination, and only the Catholic Church has released detailed data about its own. But based on the surveys and studies conducted by different denominations over the past 30 years, experts who study child abuse say they see little reason to conclude that sexual abuse is mostly a Catholic issue. “We don’t see the Catholic Church as a hotbed of this or a place that has a bigger problem than anyone else,” said Ernie Allen, president of the National Center for Missing and Exploited Children. “I can tell you without hesitation that we have seen cases in many religious settings, from traveling evangelists to mainstream ministers to rabbis and others.”

There are several huge problems with this. First of all, as this article mentions over and over again, there is little data to support this “claim,” but there’s also little data to disprove it, partially because child molestation is the most underreported crime. It is, therefore, impossible to prove this, but anyone familiar with these cases knows that priests can exert forms of coercion that normal child-rapists cannot, so the rate of unreported cases is likely much greater. A responsible, disinterested journalist would point that out. Instead, Newsweek takes the silence of victimized children, bought with torture and threat of eternal damnation, and uses it against them.

And those “surveys and studies conducted by different denominations?” Click the links. One is a New York Times article that mentions an “informal church survey” that found “between 10 and 23 percent of clergy nationwide have engaged in sexualized behavior or sexual contact with parishioners, clients, employees, etc., within a professional relationship.” So, an informal survey about a completely different topic.

The Christian Science Monitor study they cite isn’t about child rape by clergy, but by anyone connected with a church. It found that, among Christian churches, most sex abuse allegations were made against church volunteers, and that most church child-sexual-abuse cases involve a single victim. It sounds to me like most churches are really good at catching and stopping child rape.

Contrast that with the Catholic church, which even the Newsweek article nonchalantly observes is “historically… bad at punishing (or preventing) molesters.”

That helps explain the 200 children who were abused at a school for the deaf. It didn’t happen because the school was full of rapists; it happened because one man was never stopped.

This encapsulates the fundamental dishonesty of this whole exercise. The reason people like me cannot understand why any parent would ever bring their child anywhere near a Catholic church isn’t because more priests are child molesters than anyone else. It’s because the ones that are will do it over and over again, and even when they are caught, will be thrown like a grenade into another church full of children, with the full knowledge of the church’s monolithic leader. A normal child rapist is much more likely to see the inside of a prison cell, and the business end of a melted, razor-sharp toothbrush. But Newsweek would have you simply shrug your shoulders and say, “We can all do better.”

Want a little bit of bitterly comic relief? After noting how little data there is to prove the kids’ case, Wingert uncritically cites a study bought and paid for by the accused:

The only hard data that has been made public by any denomination comes from John Jay College’s study of Catholic priests, which was authorized and is being paid for by the U.S. Conference of Catholic Bishops following the public outcry over the 2002 scandals.

Even that study, nearly 20 years out of date, finds that 4% of priests were reported to have engaged in sexual misconduct with children, averaging more than 2 victims each. That 4% is equal to the 4% of all sexual abuse claims, child or not, in the CSM study.

This is not about religion, it is about the church, an organization that has proven overwhelmingly unworthy of its adherents’ trust.