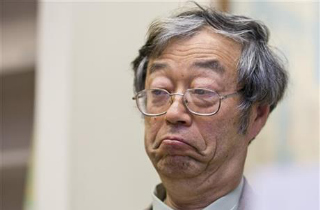 A number of mysteries have swirled around Bitcoin this year, such as who invented it, and what even is Bitcoin, and why won’t you people stop talking about Bitcoin?

On Thursday Newsweek, the ongoing will-they-won’t-they rom-com between print and digital media, reported that they had uncovered the identity of the man who wrote the original code for the online currency, naming 65 year old Temple City, Calif., engineer Satoshi Nakamoto as patient zero for this weird cultural crossover period of magical fantasy trading cards and commerce. Whodunnit solved! There’s just one problem, Nakamoto denies he had anything to do with it.

In an interview with the AP yesterday Nakamoto said he had never even heard of Bitcoin until Newsweek‘s Leah McGrath Goodman contacted him three weeks ago.

Naturally, in a story this convoluted, there are all manner of conspiracy theories being bandied about the internet as to what’s actually going on here. In Nakamoto lying? Is it all a government set up in order to… well no one really knows what, artificially inflate the trading price of the fedora market maybe? Or maybe it’s all just a stunt ginned up by Newsweek to trumpet their return to print as some have suggested. People will suggest anything though.

The AP explained his disavowal of the piece:

He also said a key portion of the piece — where he is quoted telling the reporter on his doorstep before two police officers, “I am no longer involved in that and I cannot discuss it” — was misunderstood.

Nakamoto said he is a native of Beppu, Japan who came to the U.S. as a child in 1959. He speaks both English and Japanese, but his English isn’t flawless. Asked if he said the quote, Nakamoto responded, “No.”

“I’m saying I’m no longer in engineering. That’s it,” he said of the exchange. “And even if I was, when we get hired, you have to sign this document, contract saying you will not reveal anything we divulge during and after employment. So that’s what I implied.”

You couldn’t invent this stuff. Well, maybe you could if you also invented a magic new form of money.

For their part, Newsweek stands by their reporter, releasing a statement today that compared the push back against the piece to some of the best journalism of all time!

Ms. Goodman’s research was conducted under the same high editorial and ethical standards that have guided Newsweek for more than 80 years. Newsweek stands strongly behind Ms. Goodman and her article. Ms. Goodman’s reporting was motivated by a search for the truth surrounding a major business story, absent any other agenda. The facts as reported point toward Mr. Nakamoto’s role in the founding of Bitcoin.

It is natural and expected for a major news revelation such as this to spark debate and controversy. Many of the greatest journalistic scoops have prompted similar reaction. Such debate is part of the democratic process and essential to the functioning of a free press.

Many critics are picking up on the language here –- “the facts as reported point toward…” — as being a sort of milquetoast endorsement. All of which brings up a good question someone should investigate: