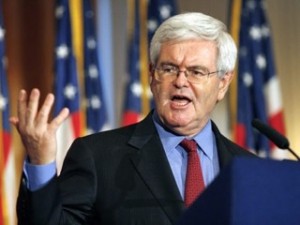 Newt Gingrich, who is never above pandering or slandering, claims he now supports a plan akin to the DREAM Act, which died in Congress last year. While the original DREAM Act sought to provide a way for undocumented young immigrants to have a pathway to citizenship, Gingrich supports a faux DREAM Act that would do so by mandating military service.

Serving in the military is one of the highest levels of service a citizen can perform. Friends of mine have served in various branches of the armed forces and all have had similar things to say about it, namely: the life-long lessons they’ve learned in leadership and character helped breed success after the military. But they made a choice. It was voluntary and not since the Vietnam War has there been conscription (a military draft) in the U.S. And for good reason. Doug Bandow, of the Cato Institute, noted in his research that conscription leads to, “increased personnel turnover, more disciplinary problems, an entire force geared to getting out of rather than staying in the military, and unpredictable social turmoil.”

Conscription for immigrants, while it no longer exists for citizens, is particularly onerous. Rep. David Rivera (R-FL) sponsored the faux DREAM Act that Gingrich was quick to endorse. Rivera said he wrote the bill because, “if these young people are willing to die for America, then certainly they deserve a chance at life in America.” That may be true, but why would we ask more of immigrants than we do of our own citizens? By going down this route we’re effectively saying that becoming an American requires a sacrifice that not even Americans who are born here still have to make. Not only is it unfair — it’s perverse. Moreover, what is the guarantee that conscription for immigrants won’t lead to the same negative consequences experienced with conscription for citizens?

Now Gingrich and Rivera aren’t the first to consider conscription for immigrants as a way of attaining citizenship. In 2009 the Obama administration began a pilot program for immigrants with green cards to enlist and earn citizenship in as little as six months. How is this any different than Gingrich’s faux DREAM Act? It’s different in both purpose and level of sacrifice. First, the purpose was to shore up the military. It’s more likely that these green card holders have, “more education, foreign language skills and professional expertise than many Americans who enlist.” Second, the sacrifice isn’t mandatory, it’s optional. Green card holders are already on their way to citizenship and even though it can take up to five years to finally achieve it, they already are permanent residents and have certain benefits bestowed upon them. The folks Gingrich’s faux DREAM Act would target are those who are undocumented and would be forced to enter the military, or risk being deported if caught.

Military service should always be a choice – whether it’s a U.S. citizen contemplating their future or an immigrant interested in investing in their new country. Conscription was never popular nationally, nor in the Gingrich household, when Newt decided to defer due to being a a graduate student. Later, he would say, “Given everything I believe in, a large part of me thinks I should have gone over.” The law gave Newt a choice even during conscription. We shouldn’t ask more of immigrants than we do our own citizens.