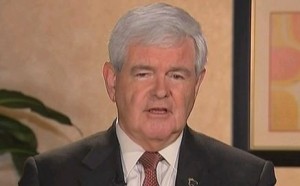 If it seems like you haven’t heard much about Newt Gingrich lately, know that it’s not you. The former frontrunner in the GOP nomination field, Gingrich has recently fallen into a state of near-obscurity, dropping to third place in most national polls and inching his way out of the public spotlight.

As subjective as it sounds to say that Gingrich hasn’t been as present lately on TV, there’s actually a way to prove this as fact. Using numbers culled from TVEyes, a company that archives and transcribes hundreds of television stations, we can see Gingrich fading into obscurity. On Feb. 1, Gingrich was mentioned on television — anywhere from C-SPAN to MTV to your local news station — 11,463 times. Only Mitt Romney had more mentions, with 14,085. Rick Santorum was mentioned 4,540 times, while “Ron Paul” was said 4,695.

Then things start to go awry.

There are two ways to look at this, and neither is good for Gingrich. The first is his decline in mentions:

The second is how his share of TV mentions has been squeezed, as Santorum’s have increased. Watch as his area of red decreases as the days go by, while Santorum’s green area gets larger: 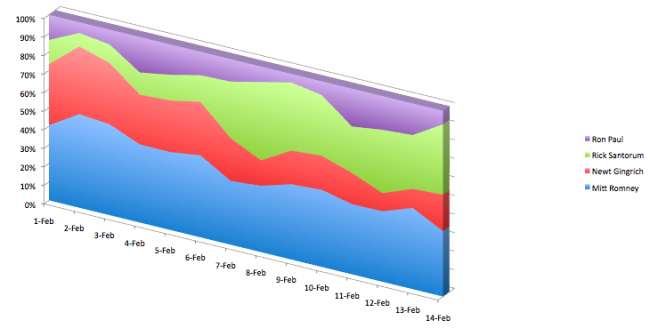 One thing Gingrich has going for him? He usually sees spikes after his tremendous debate performances. And CNN happens to be holding a debate in Arizona on Feb. 22. So perhaps that could provide a boost for him. But, for now, Newt Gingrich looks like he’s locked in a downward spiral, and he seems to be doing little to remedy the situation.