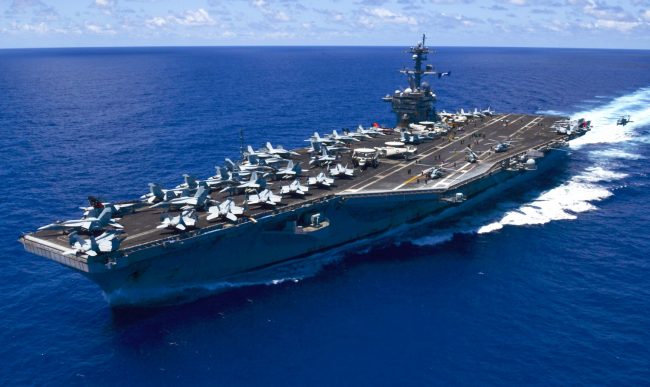 North Korea continues to offer new warnings to the United States, this time threatening the U.S.S Carl Vinson after President Donald Trump previously indicated that the aircraft carrier would journey to the Korean Peninsula.

Even though North Korea produces minimal amounts of electricity and its people are kept in a state of near-starvation, the state run newspaper Rodong Sinmun released an editorial this weekend with a threat of imminent and deadly “military force.”

“Our revolutionary forces are combat-ready to sink a U.S. nuclear-powered aircraft carrier with a single strike,” the paper said. “The United States should not run amok and should consider carefully any catastrophic consequence from its foolish military provocative act.”

CNN reports that the Carl Vinson is currently heading to the Pacific Ocean, where it will take part in tactical drills with two Japanese destroyer ships. Rodong Sinmun also said North Korea had missiles which could reach the Asia-Pacific region, and they recycled claims about possessing hydrogen bombs.

Over the last several weeks, there have been international concerns and warnings that hostilities with North Korea could escalate. The country recently undertook a failed missile launch, and U.S. military officials have found evidence suggesting they are weighing a sixth nuclear test.