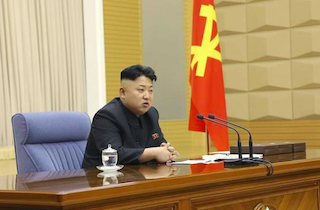 Most articles published boy North Korea’s state-run news agency are translated into English, but not this one. This week, blogger Josh Stanton uncovered a racist screed posted on May 2 by the Korea Central News Agency that uses a wide variety of viciously racist terms to describe President Barack Obama, including phrases like “it’s certain that Obama has slipped out of the body of a monkey” and “he should live as a monkey in an African natural zoo licking the breadcrumbs thrown by spectators.”

A milder version of the same article was translated into English by the North Korean media, this one calling Obama a “wicked black monkey.” But that was tame compared to the longer, Korean-only piece that was attributed to four different regular citizens of North Korea. The Washington Post published additional translations from that article such as “he is a crossbreed with unclear blood and “he still has the figure of monkey while the human race has evolved through millions of years.”

The Post’s Chico Harlan cites academics who claims that North Koreans have a fundamentally “race-based” worldview. Harlan quotes a recent United Nations report that ties the practice of forced abortions or infanticide on women who are impregnated by non-North Koreans to “an underlying belief in a ‘pure Korean race’ in the DPRK [Democratic People’s Republic of Korea] to which mixed race children (of ethnic Koreans) are considered a contamination of its ‘pureness.’”

While most Americans will likely find these official statement by the North Korean government reprehensible, one question remains: What will Dennis Rodman think?