Not Just Rubio: Obama Said In 2008 That Biblical Story Of Creation Is ‘Essentially True’ 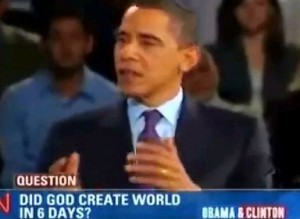 The Republican party gets a lot of flak every time its members make a comment that flies in the face of sound science, especially where the Bible is concerned. Marco Rubio caught some criticism this week after hedging on the big creation question in a GQ interview, where Rubio appeared to be walking a thin line between reassuring rational Republicans and pandering to the party’s religious base. But yesterday, Slate writer Daniel Engber highlighted a similar answer Barack Obama gave when he was running for president in 2008.

Obama made the following comments about the Biblical story of creationism at CNN’s Compassion Forum at Messiah College in April 2008.

“What I’ve said to them is that I believe that God created the universe and that the six days in the Bible may not be six days as we understand it … it may not be 24-hour days, and that’s what I believe. I know there’s always a debate between those who read the Bible literally and those who don’t, and I think it’s a legitimate debate within the Christian community of which I’m a part. My belief is that the story that the Bible tells about God creating this magnificent Earth on which we live—that is essentially true, that is fundamentally true. Now, whether it happened exactly as we might understand it reading the text of the Bible: That, I don’t presume to know.”

In other words, Obama said the same thing as Rubio. Rubio’s comments may have been slightly worse since he said the age of the earth is currently in “dispute amongst theologians” and not, say, scientists, but he says that he’s not sure if the question over how long creation lasted will be answered in our lifetimes, which is “essentially” what Obama said four years ago.

Watch the video of Obama’s 2008 remarks below, courtesy of CNN: