Now That We ‘Know’ Hillary ‘Won’ the First Debate, Here’s Why Trump Might be Checkmated 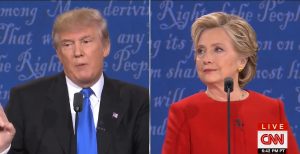 While it is still a little early to know for sure (as if that has ever stopped anyone in the Internet age from drawing conclusions), the first post-debate polls are clearly trending in exactly the direction which basic rationality would have led you to expect. It now appears, just as I predicted two hours after what I referred to as the “Rumble in the Jungle,” that Hillary Clinton will be leading Donald Trump by a small but sturdy margin in the national polls, at least until something very significant happens to change that reality.

While, at this point, the movement in the polls created by Trump getting “beaten” at the first debate will likely seem rather small, in reality such a shift may end up being decisive. This is not just because we are getting so late in the race that any legitimate lead is very difficult for anyone overcome. It is also because this reality places the Trump campaign in such a strategic disadvantage that it might end up finally being “checkmate” for the unqualified fraud who duped the Republican Party into nominating him for president.

The first reason for this is that Trump’s brand is that of a “winner.” In the primaries, even when it seemed like he “lost” debates, it never seemed to hurt him. This created an aura of “magic” around him which has had an enormous impact both on his brainwashed followers, but also on significant elements of the news media which have bought into the fairy-tale narrative that the normal rules simply don’t apply to him.

But now, Trump the “alpha-male,” on the biggest stage of his life, flat-out choked. He got beaten, badly, by a “girl” who his supporters have claimed would literally not be able to stand up to him for ninety minutes. Even worse, he was reduced to meekly blaming his microphone and pretending that he “held back” (choked) in order to protect the “girl” from embarrassment. Now he is reportedly pissed at some of his backers for having the gall to admit that he lost.

So much for the “alpha-male.”

Trump being stripped of his status as the invincible “BMOC” will likely hurt him more than in just the image department. Because his ego is so monstrous, and he is so remarkably/tellingly insecure, I will be shocked if at the second debate he does not make a concerted effort to immediately regain his standing as a strongman and a “winner.” In Trump’s mind that will mean having to “destroy” Hillary and, to do that, he will actually have to ratchet up, not tone down, his attacks on her.

This will likely end up being a classic case where one mistake begets another.

This is because Trump’s biggest problem in the first debate was his un-presidential temperament and, by “doubling-down” on aggressiveness, he would only further cement in minds of a majority of voters that he is simply not qualified for the position. Had he erred on the side of being too soft or nice in round one, he would have the “cover” to take the gloves off in debate number two, but now he clearly does not.

Making matters worse for this “hot and then hotter” strategy is that the second debate is a “town hall” format, which is the worst possible for any candidate to harshly attack their opponent (especially a male towards a female). This is because it is an intimate setting with real people just a few feet away and clearly visible on screen. Unlike in the traditional format where the audience is never seen and just a few people cheering can make an attack seem legitimate, in a “town hall” just one or two horrified looks from audience members would render any strike by Trump impotent and cause it to be deemed a political disaster, regardless of its merit or even execution.

In short, trying to attack a woman (especially when you are behind in the polls) in a “town hall” is as awkward and dangerous as trying to discuss sex with your new girlfriend while her grandmother is in the room. The risk is just simply not worth the reward.

But even if Trump’s ego let him finally be harnessed by his handlers, that would be unlikely to work tactically either. Seeming to be “presidential” now, while possibly his best of limited/bad options, would likely seem, at best, contrived and insincere. Also, since, barring major news in the next ten days, he will be behind, laying down your arms, especially for someone like Trump, is an unlikely way to stage a comeback (especially since his “unfavorable” ratings are so disastrous).

If he were to dial it back too much now (with Trump, it seems everything is an on/off switch rather than a water faucet) the contrast with the first debate would be so dramatic that he would risk the media creating a narrative of him being “neutered,” rather than “presidential.” Strategically, Trump has simply put things in reverse order and boxed himself into a corner.

Now, I know there are “conservatives” who are holding on to the idea that a bad first debate can be overcome (just look what president Obama did last time!) and that Trump may even benefit from lowered expectations. However, the Obama comparison is simply invalid (unlike Trump, Obama was president, he had been ahead, and he had the vast majority of the news media on his side), and the lower expectations for his temperament only work if, against what he has already promised, Trump decides to take a high road which very well may never lead to him overcoming his deficit.

If I were advising Trump (LOL), I would tell him this is the only path which might even give him a chance at victory. However, even it would require: Trump having discipline the likes of which he has never shown before, Hillary stumbling, some news event working in his favor, and then him somehow being able to survive the most substantive/difficult debate, which will be the final one moderated by the very tough Chris Wallace. Even then, Trump would still need some luck on Election Day.

So, yes, I am saying there is a chance Trump could pull this off… just not one for which there is any evidence to suggest that it will actually come to fruition. He may not be “checkmated” quite yet, but it is difficult to see how he finds a route to actual victory.