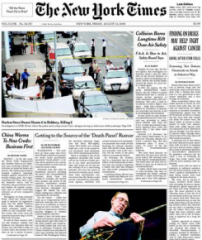 Yesterday on our Office Hours show guest Garrett Graff noted that every August when congressman and senators return to their states and some story arises out of a public disaffection over the issue of the day and grabs the national spotlight. This year it is the Health Care debate. Last year it was…well it was the campaign. There was no summer news slump last year to hijack (unless you count the brief appearance of the Montauk Monster!). Both the conventions landed at the end of the summer and it was full steam ahead throughout the weeks leading to them. The summer before? Well believe it or not that was the campaign also. It’s hard to recall now, but the presidential debates started eight months before the primaries officially began in January ’08, and they kept the MSM fairly occupied throughout.

So what was the summer slump storyline of 2006? No idea. A quick scan of TVNewser’s headlines from August 2006 (which give a sense of what the cablers were talking about at the time) show that no one story dominated. A glance at Frank Rich‘s columns from the month are equally non-revealing. Point being, it’s been quite some time since a summer news story high-jacked the national headlines the way the shouting over the Town Hall-Health Care debacle has managed to do. The ratings gods must be very grateful!

The question now, of course, is does anyone actually know what they are shouting about? The proposed Health Care bill is currently 1000 plus pages of policy wonkiness. That’s a lot of complicated reading. That’s a lot of opportunity for certain people to paint it in broad strokes. It’s also a lot of opportunity for people in need of a narrative to create one! But has it gone too far? A lot of people think so. Namely Glenn Beck‘s advertisers who did not take too kindly to his comments that the President was racist and the Health Plan was actually a secret eugenics program. In fact Fox News as a whole is lately coming under some fire for inciting the unrest (Gawker’s John Cook had a most excellent piece on this the other day: “It’s as if there had been a 24-hour cable news channel in 1981 devoted to coverage of Jodie Foster, and what it would take for someone to get her attention.”). That said it’s not like the other cablers are adding much insight beyond a lot of additional chatter/yelling. MSNBC and CNN are just as guilty of latching on to the town hall “controversies” as anyone. You know what would be great right now? Some MSM intervention.

There is so much disinformation flying around at the moment wouldn’t it be great to have someone in the media who had at their disposal the time and resources, step in and separate fact from fiction. And we mean really separate it in a slow and deliberate way. Like, say, a Sunday Times in-depth expose about what we are hearing on TV vs. what is actually written down in the bill. Or, how about a serious rebuttal of Sarah Palin and Senator Grassley’s assertions. Not just what they are saying, but what they are saying wrong. And why isn’t someone in the MSM calling out Fox (Keith Olbermann doesn’t count, in fact he should probably be added to the list)? What about devoting five minutes of every network newscast next week to truth squading the Death Panel claims! This is what the MSM does well: a longer, slower, prepared news report. Details! Digging! Everyone still employed by newspapers and networks is so keen to tell us that newspapers and networks are still relevant, wouldn’t now be a great time to demonstrate that fact? With facts? People will listen. The MSM is down, but not out. People — meaning bloggers, cablers, and town hall attendees — still listen to what they say. We’ve seen a bit of what they are capable of today with the NYT expose of Betsy McCaughey. It would be nice to see that “public trust” leveraged in a more consistent and useful way while we still have it at our disposal.