NRA Executive Calls Hillary a Horse, Makes Cracks About Her Sex Life With Bill, And Of Course Lies 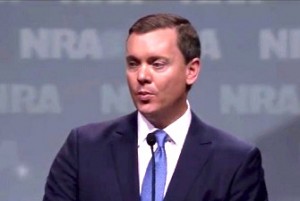 Chief NRA lobbyist and Boyle-from-Brooklyn 99 lookalike Chris Cox was the opening act for presumptive Republican presidential nominee Donald Trump at Friday’s National Rifle Association Annual Meeting, and didn’t waste any time making some vicious attacks on likely Democratic presidential nominee Hillary Clinton, and telling a string of lies about her to boot. Cox began by asking the crowd if they had a right to defend themselves with firearms, not in public or in their cars, but in their homes. He then asked if they knew where Hillary stood on the issue, pointed to a video monitor, and said “Let’s hear it from the horse’s mouth!”

He then “accidentally” played a doctored clip of Hillary barking, followed by audio that seemed to confirm his claim about Hillary’s position. Later in the speech, Cox joked that Hillary could be in prison soon, then made a joke about her sex life that compelled him to apologize to his mother. Here are those “highlights”:

The crowd ate up the crude insults, as well as the fear-mongering about Hillary Clinton, as well they should have. That leaked audio he played was pretty damning, especially since he specified that he was only talking about the right to have a gun in your home, not somewhere else, because that’s clearly not what Hillary Clinton was saying in that audio clip:

The idea that you can have an open carry permit with an AK-47 over your shoulder walking up and down the aisles of a supermarket is just despicable.

Oops! As a matter of fact, much to the chagrin of many liberals, both Hillary Clinton and Barack Obama profess a belief in the right to individual gun ownership, and even Krazy Kommie Bernie Sanders won’t make Heller a litmus test for the Supreme Court. If the NRA were so convinced of the rightness of their position, there would be no reason for them to lie right to the faces of their members.