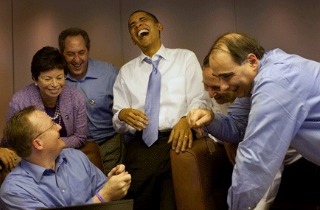 We were just asking for it. This is, essentially, what Century Foundation fellow Michael Cohen took to the pages of the New York Daily News on Monday to say. In a profound scolding, Cohen diagnoses America’s “immaturity” as demonstrated by the backlash against President Barack Obama over to his oft-repeated and false claim that every American who was happy with their health insurance would be able to keep their health insurance.

This was never true. The president and his staff were aware this was not true as early as February, 2010. Some media outlets reported that, for millions of Americans, they would not be able to keep their insurance plans. But, for Cohen, it was a noble lie – one that Americans should accept. He contends that a “schizophrenic” public welcomes the radical reforms contained within the Affordable Care Act but selfishly balks at the prospect of breaking a few eggs to achieve this virtuous end.

“[B]efore we fully castigate the President for his rhetorical flights of fancy, it’s important to keep in mind that Obama was — to a large degree — telling Americans what they wanted to hear,” Cohen writes, as though noting that lying to the public over telling them unwelcome truths was simply easier and therefore exonerating.

“Americans regularly express dissatisfaction with the status quo and demand political change,” he continues. “But at the same time, they recoil at any reform that affects them directly.”

After asserting that “most Americans are largely unaffected” by the ACA, he notes that catastrophic policies purchased on the individual market “could barely be considered insurance.”

“That these Americans would not be able to keep their plans was not a bug of Obamacare; it was the point,” Cohen clarifies, shedding light on a point that would have been informative had he alerted us to it at any time over the course of the last three years.

Acknowledging that reality would have been the honest thing to do. So would asking healthier and wealthier Americans to sacrifice for the greater good of ensuring every American have health-care coverage.

But doing so would have opened Obama and his democratic allies up to the charge that Obamacare would lead to widespread dislocations — and made the path to reform that much politically harder to traverse.

“So accuse Obama of lying about health-care reform,” he concludes, “but understand the simple underlying reality: we can’t handle the truth.”

The instinct to display contempt for those who react poorly to having been lied to by their president, and who are frustrated at those media outlets that failed to adequately debunk this untruth before they became its victims, is a confusing one.

Chances are, however, that Cohen wrote what many of the president’s supporters think but dare not commit to paper – yet. That those voters who are rejecting the president, evidenced in opinion polling and elsewhere, are undeserving of his genius and compassion.

That sense of superiority must be comforting in times like these.