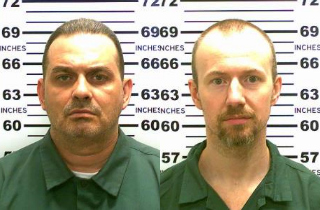 New York Governor Andrew Cuomo offered a $100,000 reward Sunday for information leading to the return of two prisoners who tunneled out of the Clinton Correctional Facility yesterday.

“This is a crisis situation for the state,” Cuomo said in a press call Sunday. “These are dangerous individuals. These are killers, these are murders. There has never been a question about the crimes they committed.”

The state seeks the return of Richard Matt and David Sweat, inmates who vanished from their cell early Saturday morning. Officials said they created dummies out of sweatshirts to fool the guards and used power tools to drill their way out. The men, both in prison on murder charges, left behind a cheeky note with a smiley face that said, “Have a nice day.”

It’s the first prison break from the facility in over 150 years of operation. “This is the first escape,” Cuomo said, “and we want to make sure it is the last escape.”

Cuomo said the two could be anywhere in the state and advised anybody who spotted the suspects not to approach them.

We toured the route within Clinton Correctional Facility that 2 inmates used to escape. Pics: https://t.co/Z1v5la9M5S pic.twitter.com/09dMyZVqq7

View photos of our tour of prison escape route in Dannemora: https://t.co/Z1v5la9M5S pic.twitter.com/hiXhkBJil8

Watch the reports below, via NBC