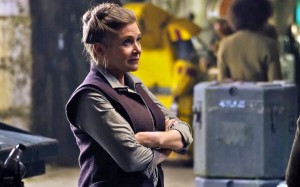 A New York City Pizzeria honored Carrie Fisher by giving customers dressed as Star Wars characters free pizza. Champion Pizza in Soho gave out free slices to anyone dressed as any character, and entire pies to those dressed as Princess Leia.

Mike Fricchione, president of the New York Star Wars Fan Club told the New York Daily News, “We had some amazing pizza… It really helped fill the void left by Princess Leia. She was someone who was really inspirational to a lot of us.”

The owner of the Pizzeria told NYDN that he got the idea based on an encounter he had with Fisher in 2005. He served her a slice of pizza when he was working at a different spot in Times Square. He said, “She had a positive message about fighting evil and about moving forward, and about fighting for the good side.”

Lots of people came out for the event, dressed accordingly:

Anyone in Star Wars costume eats for free at Champion Pizza in honor of rebel champion Carrie Fisher. @championpizzasohonyc #soho