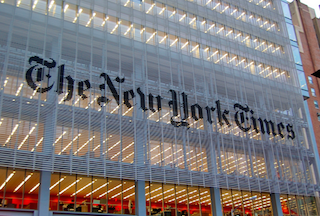 Does it ever bother you when you’re reading an article in The New York Times and the reporter quotes a handful of anonymous sources who are willing to speak their minds about a given issue but not on the record? Well, it turns out that also bothers NY Times public editor Margaret Sullivan, who launched a new feature on her blog Tuesday called “AnonyWatch” to track all those “regrettable examples of anonymous quotations.”

An initial example of the pervasive phenomenon is Ginia Bellafante’s column about Mayor Bill de Blasio’s trip to Albany in which a “Democratic insider” says the mayor thinks he and the New York governor are friends “but Andrew Cuomo doesn’t really have friends.”

“How does that square with The Times’s clear written rule not to smear people anonymously?” Sullivan asks, citing the rule “Anonymity should not be used as a cloak for personal attacks.” She adds, “And what exactly is a Democratic insider, I wonder. A Cuomo insider? A De Blasio insider? A guy inside Democratic headquarters after hours with a mop?”

After quoting another example involving an unnamed pilot makin wild accusations about Malaysia Airlines Flight 370, Sullivan writes that she asked the paper’s managing editor, Dean Baquet, about the issues and he said both were “mistakes.”

“Anonymous sources and quotations sometimes have their place in Times stories -– in those rare instances when there is no other way of getting crucial information,” Sullivan concludes in her post. “Neither of these examples meets that standard, however, so it seems that some firm reminders to editors are in order.”

She also cites a third story that drew the attention of Huffington Post media critic Michael Calderone, in which Bill Carter got a “senior CNN executive” to defend that network’s wall-to-wall coverage of the missing plane story. If all the executive is doing is touting CNN’s vast news-gathering resources, Calderone asks, why should they have to do it anonymously?

Of course, this is not just an issue that effects The New York Times. Last month, when NFL prospect Michael Sam came out as gay, Sports Illustrated ran an article that quoted several anonymous NFL officials who said it could hurt his career. On the one hand, the magazine was able to get “honest” reactions from these people because they did not have to give their names. On the other, the officials were allowed to use the anonymity provided by Sports Illustrated to espouse what was essentially homophobia.