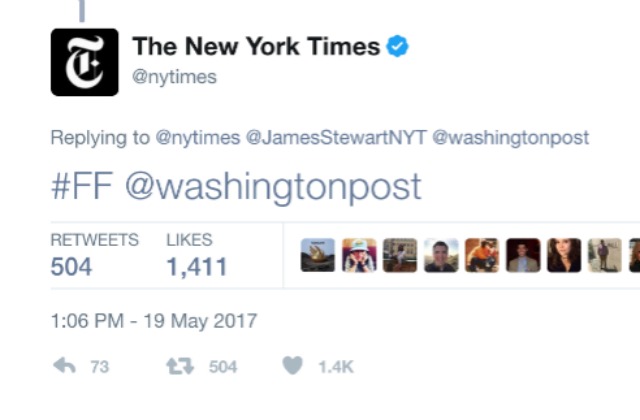 The Twitter account of the Times promoted the piece by James B. Stewart by touting how the author was prompted to become “a @WashingtonPost subscriber after Monday’s Russia scoop.” A minute later, it gave a shout-out to the Post with a #FF (Follow Friday) Tweet linking to the the newspaper’s account.

Our columnist @JamesStewartNYT on becoming a @WashingtonPost subscriber after Monday’s Russia scoop https://t.co/0wS9EM9lbi

As you might expect, this led to a number of positive and negative reactions from other Twitters users. There were more than a few “get a room” replies from journalists at other media outlets:

@nytimes @washingtonpost Get a room!

@washingtonpost @nytimes get a room

@washingtonpost @nytimes get a room guys

It should be pointed out that within minutes of the exchange between the two newspapers, each had published a new expose involving President Donald Trump and the ongoing Russia controversy. This timing didn’t go unnoticed on Twitter:

So this happened. Then @nytimes and @washingtonpost each dropped bombshells moments after Air Force One was wheels up. pic.twitter.com/U20atZeIdw