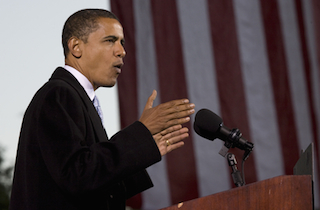 Per the New York Times, the Obama administration is planning a minimum 36-month military and political effort to defeat ISIS, the band of Sunni militants that has been marauding across Syria and northern Iraq. The administration warns that the effort will likely extend past Obama’s second term.

Obama is expected to address the nation Wednesday to outlined the proposed strategy, which calls for an initial round of airstrikes (that has in fact already begun) against the militant group in Iraq, followed by a phase of training Iraqi, Kurdish, and potentially Sunni fighters, and then a campaign against ISIS in its stronghold of Syria, where a violent civil war has raged for over two years.

The Syrian component is expected to be extraordinarily difficult, as unlike in Iraq the U.S. has no preexisting relationships in Syria and is in fact opposed to President Bashar al-Assad, who would be our putative ally against ISIS.

As the Times pointed out, this strategy is unprecedented, given its duration mixed with its lack of ground forces:

Unlike American counterterrorism operations in Yemen and Pakistan, it is not expected to be limited to drone strikes against militant leaders. Unlike the war in Afghanistan, it will not include the use of ground troops, which Mr. Obama has ruled out.

Unlike the Kosovo war that President Bill Clinton and NATO nations waged in 1999, it will not be compressed into an intensive 78-day tactical and strategic air campaign. And unlike during the air campaign that toppled the Libyan leader, Col. Muammar el-Qaddafi, in 2011, the Obama administration is no longer “leading from behind,” but plans to play the central role in building a coalition to counter ISIS.

The United States is taking the lead in assembling a coalition against ISIS, with Secretary of Defense Chuck Hagel wooing Turkey as we speak.

[Image via spirit of america / Shutterstock.com]