Obama Tells MTV Town Hall: I’m Against DADT But Must Be Removed In ‘Orderly Fashion’ 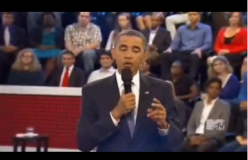 President Obama had his town hall with MTV viewers this afternoon and judging by Twitter they did not go easy him. Chuck Todd notes “questions to POTUS are fascinating and challenging; Definitely not a bunch of “boxer/brief” stuff.” Based solely on the interns we’ve had in this office the past year this does not at all surprise me.

A number of the questions went right to the heart of this week’s top news stories, namely DADT and childhood bullying, which schools need to take seriously. Said one questioner: “I voted for you in the last election based on your alleged commitment to equality for all Americans, both gay and straight, and I wanted to know where you stood on DADT.”

The questioner went on to ask why, if Obama was really committed to ending DADT, he didn’t just write an executive order the way President Truman did in 1948 in order to desegregate the military.

Obama responded by reiterating that he “is against DADT” and additionally that this is not a policy that he can simply end with the stroke of a pen. Which is actually sort of a gray area. Obama obviously can’t repeal a law that Congress has passed, however he could write an executive order saying it can’t be enforced. That said, an executive order could easily (technically speaking) be overturned by the next President. Either way, there is a certain irony in Obama coming out so strongly against DADT when at the same time his Justice Department is asking the judge to let DADT continue while they appeal yesterday’s ruling.

Obama did note yesterday’s ruling that DADT was unconstitutional but would only say that he agrees with the “basic principle that anyone who wants to serve in our armed forced” should be able to serve and “shouldn’t have to lie about who they are.” But also, that its removal needs to be done orderly because we are at war right now.

In response to another question, Obama also said that homosexuality is not a choice and that people are born with a “certain makeup.”

One can only hope the questions at the 2012 Presidential debates are as strong as today’s. Watch below.