Obama To Supporters: Romney Wants You To Pay More So ‘People Like Him Can Get A Big Tax Cut’

Obama To Supporters: Romney Wants You To Pay More So ‘People Like Him Can Get A Big Tax Cut’ 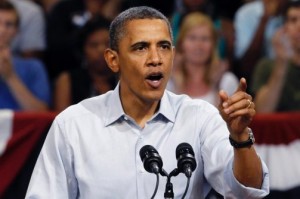 President Obama slammed Mitt Romney on the campaign trail today, touting a new study by the Tax Policy Center finding that Romney’s tax plan would impose higher tax burdens on middle- and lower-class Americans while cutting taxes for those in high-income households. Obama told the audience that Romney is pushing this economic plan to give tax cuts to “people like him.”

RELATED: Megyn Kelly Guests Reduced To Shouting Over Whether Obama Is ‘Antagonistic’ Towards American Dream

Obama was speaking in Ohio earlier today when he brought up the report and used it to go after the Republican candidate’s economic policies.

A Romney spokesman responded to the president by dismissing the report as the latest in a number of “liberal studies calling for more tax hikes and more government spending.”