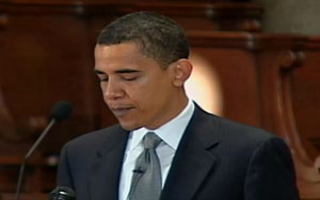 Obama made this appeal from the floor of the U.S. Senate in 2006 as he and his fellow Democrats rallied against raising the debt ceiling limit. Then, the national debt stood at just over $8 trillion. Today, it has ballooned to more than $16 trillion. On Wednesday, Obama told ABC News host George Stephanopoulos that there is no “immediate crisis in terms of debt,” and he will not pursue a balanced budget “just for the sake of balance.” In light of these comments, Obama’s words from 2006 merit revisiting.

RELATED: Obama In Wide-Ranging Interview With ABC: ‘We Don’t Have An Immediate Crisis In Terms Of Debt’

Human Events columnist David Harsanyi dug up Obama’s floor speech from 2006 in opposition to increasing the debt ceiling limit. It is worth the read in its entirety, but a few choice elements are particularly damning in light of the president’s recent dismissal of debt reduction as a worthwhile pursuit.

“The fact that we are here today to debate raising America’s debt limit is a sign of leadership failure,” Obama said. “It is a sign that the U.S. Government can’t pay its own bills. It is a sign that we now depend on ongoing financial assistance from foreign countries to finance our Government’s reckless fiscal policies.”

“[I]t took 42 Presidents 224 years to run up only $1 trillion of foreign-held debt. This administration did more than that in just 5 years,” Obama said of the Bush administration. “Now, there is nothing wrong with borrowing from foreign countries. But we must remember that the more we depend on foreign nations to lend us money, the more our economic security is tied to the whims of foreign leaders whose interests might not be aligned with ours.”

“Increasing America’s debt weakens us domestically and internationally,” Obama said before registering his opposition to increasing the nation’s debt ceiling.

This speech is regularly circulated. In 2011, then-White House Press Secretary Robert Gibbs said that Obama only voted against the debt ceiling because he knew the Republicans had the votes to ensure the measure passed. In January, 2013, CBS reporter Major Garrett asked Obama directly about his 2006 vote.

“I think if you look at the history, getting votes for the debt ceiling is always difficult and budgets in this town are always difficult,” Obama told Garrett. “I went through this just last year. But what’s different is we never saw a situation as we saw last year in which certain groups in Congress took such an absolutist position that we came within a few days of defaulting.”

In other words, the president objects to the debt ceiling being used by Congress as a political cudgel to bludgeon the executive, except when he’s the member of Congress doing the bludgeoning.

Either the president was being disingenuous in 2006 when he so strenuously objected to the staggering rate of growth in the nation’s debt or he is being untruthful today when he tells Stephanopoulos that there is no debt crisis. Somewhere, there is an enterprising reporter just dying to ask the president to clarify his position on just how big a threat the nation’s spiraling debt poses.