Obama AUMF Use of Force Against ISIS State of the Union 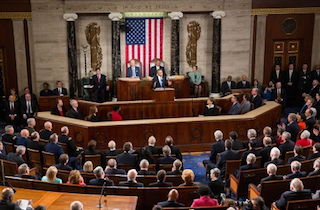 In excerpts released from tonight’s State of the Union address, the White House revealed the President Barack Obama will call on Congress to authorize “use of force” against ISIS. Despite the military action U.S. forces have been engaged in against the terrorist network for months, Congress has not yet passed an official authorization of military force (AUMF) that directly applies to ISIS. Instead, the president has used used the Article II powers that allow the Commander-in-Chief to take limited military action.

“In Iraq and Syria, American leadership – including our military power – is stopping ISIL’s advance. Instead of getting dragged into another ground war in the Middle East, we are leading a broad coalition, including Arab nations, to degrade and ultimately destroy this terrorist group. We’re also supporting a moderate opposition in Syria that can help us in this effort, and assisting people everywhere who stand up to the bankrupt ideology of violent extremism. This effort will take time. It will require focus. But we will succeed. And tonight, I call on this Congress to show the world that we are united in this mission by passing a resolution to authorize the use of force against ISIL.”

Last week, Obama addressed the issue during a meeting with Congressional leaders. Subsequently, House Speaker John Boehner (R-OH) said in a release that if the president brings the AUMF to Congress, “Republicans will work with him to build bipartisan support for its enactment.”