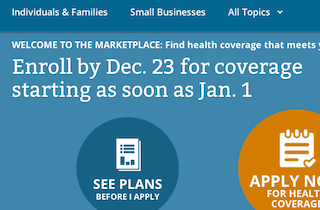 The White House has quietly delayed the Affordable Care Act’s most recent deadline for the uninsured to sign up for insurance and receive coverage by January 1. The deadline has been extended from midnight on December 23 to midnight on December 24. The chaotic series of delays and amendments to the ACA’s deadlines is some insurers, on the condition of anonymity, to lash out at President Barack Obama’s administration.

“Over the weekend, government officials and outside IT contractors working on the online marketplace’s computer system made a software change that automatically gives people a Jan. 1 start date for their new coverage as long as they enroll by 11:59 p.m. on Christmas Eve,” Washington Post reporters Amy Goldstein and Juliet Eilperin wrote just before noon on December 23.

They report that officials familiar with the thinking behind the move say that it is a “buffer” in case the troubled HealthCare.gov experiences issues associated with a last-minute surge of interest in enrolling.

The Washington Post journalists also report that the latest change has been built into the online enrollment system and cannot be overridden by insurers even if they object.

“Making yet another last-minute change to the rules by shortening an already-tight time period in which to process enrollments makes it even harder to ensure people who have selected a plan are able to have their coverage begin in January,” said one insurance industry official who spoke to the Post on the condition of anonymity.