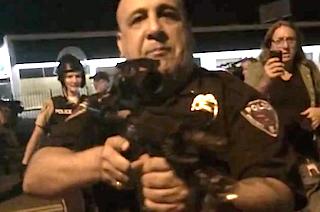 Police Lieutenant Ray Albers, better known by his nickname, Officer “Go Fuck Yourself,” has officially resigned from the St. Ann, Missouri Police Department, according to a new report from the St. Louis Post-Dispatch.

Albers came to prominence after he pointed his rifle at protesters, at least one of whom was live streaming coverage, in Ferguson on the night of August 19, yelling, “I will fucking kill you.” When the protesters asked for his name and he declined to provide it, instead saying “Go fuck yourself,” they decided to just call him that.

Later, the ACLU succeeded in getting Albers removed from duty, at least temporarily, after writing a letter to the Missouri State Highway Patrol that described his actions. This week, according to the Post-Dispatch, the city’s board of police commissioners made the recommendation that Albers either be fired or resign. He chose to resign.

“I’m not condoning his behavior whatsoever,” Police Chief Aaron Jiminez told the paper. “It’s very hard because he is a good friend, he was a good boss. There’s going to be those who didn’t like him who are high-fiving now. Altogether it’s going to be a black eye on the city of St. Ann because he represented our department.”

At the same, he called the way Albers pointed his weapon at protesters “totally justifiable.” Jiminez explained that just before the damning video was shot, Albers had water and urine thrown at him and allegedly spotted man in the crowd holding a gun.

There were “a whole bunch of what you’d call citizen journalists, who were sitting with cameras recording, waiting for something stupid to happen, which they got. They won on this one,” Jiminez said. As for what Albers said to the protesters, the chief said he was afraid. “That’s why he used those words.”

Watch two videos of the officer below, captured by citizen journalists during the Ferguson protests: