OK Republican: Any Muslim Who Practices Islam Shouldn’t Be Trusted 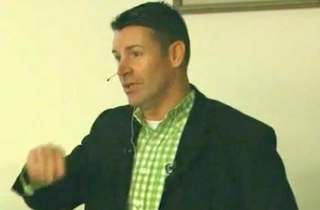 A local Oklahoma Republican representative said recently that while not all Muslims are bad people, any Muslim that subscribes to the actual practices of Islam should not be trusted. State Rep. John Bennett even went so far as to draw comparisons to Germans who were complicit in what the Nazis did.

Oklahoma, of course, got national attention after a Muslim man there beheaded a co-worker. Bennett argued, “Mohammed’s teaching only teaches one thing. And that’s the violence that we’re seeing today in ISIS and in the beheading in Moore and other places.”

One woman challenged him and said there are nice, moderate Muslims who don’t appreciate their elected leaders calling them “no better than ISIS.” Bennett shot back, “Where are your nice friends? Why aren’t they here? Why aren’t they out there saying, ‘Hey, you know what, we don’t believe in that?'”

He made a comparison to the Nazis and basically said that any Muslim who practices the Muslim faith cannot be trusted:

“You think every German was a Nazi? No, they weren’t. But what happened with the Nazis was that once they got in power, all those Germans that sat quiet or were scared to say anything had no choice but to follow and support what they were doing. “So is every Muslim bad? No. but if they subscribe to Islam and what it teaches, and if they’re not standing up and condemning what Islam teaches, then they’re just going right along with them, just like the Germans did when the Nazis were around.”