On Eve of 100th Day, Trump Tweets Thanks to Fox’s Lou Dobbs for Praising His Successes
videos

On Eve of 100th Day, Trump Tweets Thanks to Fox’s Lou Dobbs for Praising His Successes 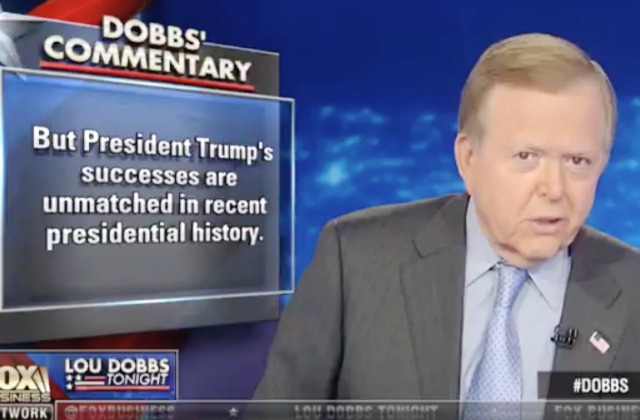 On the eve of his 100th day in office, President Donald Trump tweeted out a thank-you to Fox Business Network host Lou Dobbs for effusively praising his accomplishments thus far.

Well, tonight in his commentary, Dobbs recapped the first 100 days and said, “President Trump’s successes, however, are unmatched in recent presidential history.”

If Ryan & Congress throw full support behind @POTUS the next 100 days will be even more remarkable than the first! #Dobbs #MAGA #TrumpTrain pic.twitter.com/wL0x7x1hty

Something of note here: mere moments later in the very same segment (video above via Fox Business Network), Dobbs said Trump has been denied some victories because of “a Speaker of the House of the same Republican party who has been woefully inadequate to the responsibilities and demands of his office; Speaker Ryan working against the president and his agenda at every turn.”

Dobbs called on Paul Ryan to “vacate the Speaker’s office” just last month, and this is not the first time the president has given a shoutout on Twitter to a host in the Fox family who has taken shots at the Speaker.

Dobbs did go on to say that if Ryan threw his full support behind Trump’s agenda, the next 100 days would “be even more remarkable.”

The president tweeted this out in response to Dobbs’ commentary:

And that was after he retweeted a segment from Tucker Carlson‘s show saying Democrats don’t actually believe Trump is a Russian “pawn”: 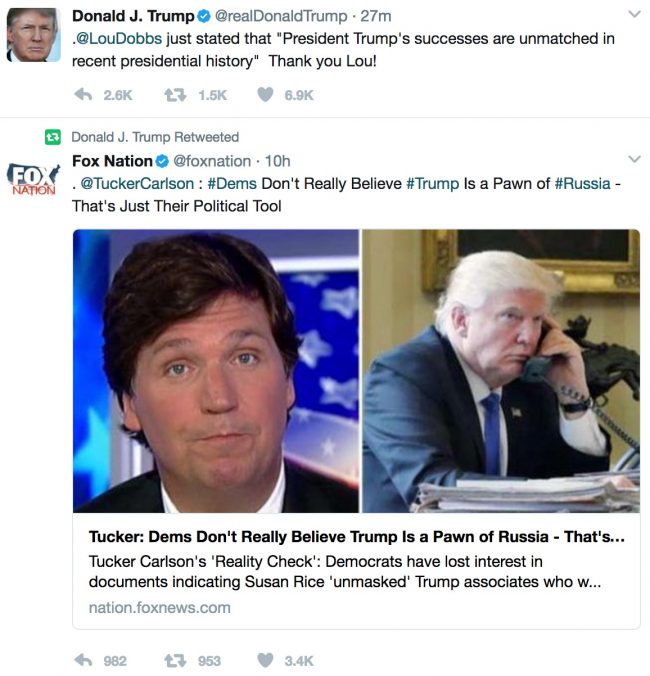 Carlson’s commentary (video below, via Fox News) centers on reporting from the Daily Caller News Foundation that only two Democrats on the House Select Committee on Intelligence have reviewed documents related to Susan Rice “unmasking” members of Team Trump.

The president did an interview today with Fox’s Martha MacCallum which included praise of Fox as the only network that’s fair to him.