On ‘Scandals’, President Obama Should Borrow From An Unfamiliar Playbook: Bush And Cheney

On ‘Scandals’, President Obama Should Borrow From An Unfamiliar Playbook: Bush And Cheney 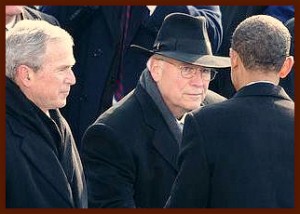 This week, scandal fever engulfed cable news, radio, and Republican dinner tables across the country, as the GOP (and some Democrats) embarked on all-out crusade against President Obama over Benghazi, IRS political targeting, DOJ hacking AP phones, and yes, the President asking for an umbrella on a rainy day. Whether President Obama is truly responsible for any “scandalous” governmental behavior or not, his reaction to never-ending GOP outrage, obstruction, and disrespect has been worse for him than any “scandal” Republicans link him to — appearing weak and reactionary—in the face of a weaker opponent creating outrage out of thin air in the absence of any coherent political or policy message of their own.

As Obama himself has acknowledged, there is little time left in his second term to get important policy items like immigration reform, gun control, climate change legislation, and economic revitalization done. Knowing this, his disaster of a response to the scandal sideshow mixed with unyielding Republican opposition even after his re-election leaves the President with only once choice: throw away the polls, send his press folks home for the day, put down his favorite Abraham Lincoln or Ronald Reagan biography, and pick up one fellow liberals might charge me with blasphemy for recommending—some George W. Bush/Dick Cheney literature.

I disagree with just about everything President Bush and Vice President Cheney did, and won’t waste column space regurgitating the endless list of mistakes, blunders, mistruths, and set of scandals that took place over their time in office. But you can often learn the most from your enemies, and the lesson for Obama to learn from his predecessors is clear: make no apologies, stand by both your own and members of your inner circles actions, and go out and fight for the issues you believe in, not waste time fighting with your political opponents.

Bush and Cheney (the latter regarded by many as the most powerful Vice President in U.S. history), didn’t give a hoot about the press slamming them, Americans railing against their actions in Iraq, and how their decisions in the White House impacted their “legacy.” Look no further to Bush’s 2009 exit press conference, when he looked back on the Charles Krauthammer-coined phrase “Bush derangement syndrome”:

Most people I see when I’m moving around the country, they’re not angry, and they’re not hostile people. I’ve met a lot of people who don’t agree with the decisions I’ve made, but they have been civil in their discourse. Presidents can try to avoid hard decisions, and therefore, avoid controversy…that’s just not my nature. I’m the kind of person that’s willing to take on hard tasks, and in times of war, people get emotional, and I understand that. I’ve never really spent that much time, frankly, worrying about the loud voices. I of course here them, but they didn’t effect my policy, nor did they effect how I made decisions.

President Bush continued with what then President-elect Obama should expect:

President-elect Obama will find this too. He’ll get in the Oval Office, and there’ll be a lot of people that are real critical and harsh, and he’ll be disappointed at times by the tone of the rhetoric. And he’s going to have to do what he thinks is right…and if you don’t, I don’t see how you can live with yourself. I don’t see how you can get back home in Texas and look in the mirror and be proud of what I see if I allowed the loud voices, the loud critics, to prevent me from doing what I thought was necessary to protect this country.

Don’t mistake a backward compliment of Bush for advocating illegal or unethical behavior in the White House. Obama, or any other President, should come out and condemn behavior that merits it. But by Obama coming out himself, giving press conferences on the hot air that is the Republican Benghazi witch-hunt, an unethical, but not unprecedented political group targeting by the IRS, and a press phone hacking story that matters mostly to the press and not to the average American, Obama gave credibility to the fact that his administration is overseeing “scandals.” And borrowing from President Bush, Obama should know that most people in the country are not angry or hostile, in this case over Benghazi, the IRS, or the AP scandal. And although it is the heat the White House might be feeling, the scandals cable news fixates on for weeks straight usually don’t match the heat most Americans are feeling.

Obama should know what most Americans are hot, angry, and hostile about, because it is why an overwhelming majority of them re-elected him. It is the feeling that the game is rigged, that economic injustice has overtaken America, and regardless of how hard they are working, most Americans are either stuck in place or falling behind. This was the defining issue of the 2012 election to the majority—not a tragic, but isolated terror attack in Benghazi, the inner workings of the IRS, or the ethical wall between our government and press. Obama needs to be able to separate what the majority are feeling and voting on with a screaming minority, made up of lawmakers worried about primary challengers and ideologues and pundits looking for ratings.

If Obama wants his second term to become more than a continual hostage situation with a GOP still hell-bent on making him lose, he needs to answer the call President Bush made in the aforementioned press conference. What does he think is right? Based on his campaign message and inaugural speech, what Obama probably wanted to come out and give a press conference on this week would have sounded like this.

Although there is a lot of noise coming out of the Republican Congress, and some cable channels, over talking points, IRS behavior, and the Department of Justice intercepting a news organizations phone lines, these are not the issues the people who elected me twice care about. These are not the issues that will do what my campaign set out to do, which is to move this country forward. There are have been countless hearings and investigation on one of these issues, and new investigations under way on the other issues that have been brought to light. With this said, I am here today to speak about continuing to revitalize our economy through more jobs, to address improved numbers in America’s debt and deficit trajectory, to continue putting a spotlight on the growing number of deaths in America due to gun violence, and to address an issue I spoke about during my second inauguration…poverty in America. In addition, I am announcing a tour this summer across America, where I will introduce new initiatives to create jobs, give new opportunities to those less fortunate, and also highlight the obstacles in our way, which include politicians in Washington. I will be answering questions on those and only those issues…time for questions, let’s start with Ed Henry, Fox News.

Can you imagine the field day the press would have, having their scandal industrial complex completely shut down by the President, being put in the weird position of covering the actual news that impacts real Americans rather than Republican ideologues and members of the press itself? What would a press conference look like, as reporters continue pushing on “scandals” while the President answers: do you have a question on the economy, guns, or the weather?

Whether you agree with George W. Bush or think he is responsible for the majority of America’s problems today, one thing is fact—Speaker Nancy Pelosi, MSNBC, and liberal pundits did not set his agenda or force his decisions or reactions. As a liberal who does think Bush did much damage to the country, I respect a leader who passionately believes what he or she believes, right or wrong-headed, and embarks on a path to accomplish those beliefs.

So, with history and America’s future on the line, it is time for President Obama to decide what he truly believes, and which one of those beliefs are worth fighting for. In the end, Obama can continue to let Darrell Issa, Karl Rove, and cable news decide the reactions he gives or actions he takes, or he can realize the power of the presidency is much bigger than extremist lawmakers or cable news channels.

Whether it was a cheesy line or not, this President started out with a promise for hope and change. The desire for both across America remains unchanged. So, although it might be a less sexy word for cable news and radio, it is time for the President to indignantly brush aside GOP created scandals and introduce a new “s” word…

What a “scandal” that would be.