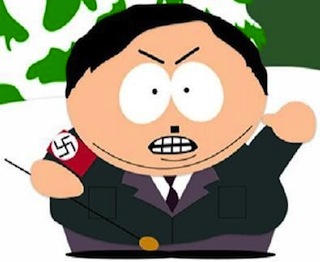 Guys, it was a long weekend. Now that I’m back at my desk, I’m trying to get back in the swing of things. Admittedly though, I’m a little rusty. So, will you guys please tell me; is it normal for major news outlets to randomly ask their readers for opinions on why “some people hate Jews”? Because that’s what Business Insider just did.

And not just Business Insider. It was Henry Blodget, the site’s CEO and Editor-in-Chief, who posted the sliiiiiiiiiightly provocative headline “Why Do Some People Hate Jews?” an hour ago. Unsurprisingly, I clicked on it. After all, it’s a slow news day (any day with this much Donald Trump is clearly slow). Besides, I’ve always wondered why people hate the folks on my father’s side. It’s time to get to the bottom of it!

But I didn’t get to the bottom of it. Blodget’s piece wasn’t about answering the question in the headline. Nor was it some kind of lengthy diatribe on Jewish identity or something. Instead, it was literally just him asking his random readers to answer in the comments.

“And hatred of Jews has obviously been an ongoing theme worldwide for centuries.

Hitler, for example, hated the Jews so much that he murdered 6 million of them.

What is the source of this animosity? Why does it perpetuate itself? Where did this prejudice come from?
I’m asking this question seriously, and I’m going to Bleacher any comments that don’t answer it seriously. As usual, I’m also going to ban any anti-Semitic commenters.”

That’s right, there sure is nowhere better to suss out the reasoning behind one of the greatest attempted genocides of our modern times than in an Internet comments section. Everyone knows that people go on to comments sections to debate two things; Who is the coolest Avenger and why did Hitler slaughter millions of Jews.

But Blodget isn’t just trying to be needlessly provocative. An edit he made to the original post makes that clear:

“NOTE: The original photo in this post was of a couple of jovial Orthodox Jews, one of whom was wearing a traditional hat. Some readers found that needlessly provocative. One suggested I replace it with a picture of Natalie Portman, who, I guess, is Jewish (I don’t know). So I have.”

And I agree that this is an important question. And, so, in the interest of fostering our own important discussion, here are a few questions of my own:

Readers, what do you think? Answer in the comments below whether you think Business Insider’s post was in terrible taste. As always, I will delete any comment that seems anti-Business Insider.

NOTE: The original version of this post was a picture of Henry Blodget eagerly watching his traffic go up. Some readers found that too provocative. One suggested I replace it with a picture of Cartman who is apparently an example of an anti-Semite. I guess. I don’t know. Whatever.

UPDATE: Apparently, Blodget is learning that this is the type of question that requires a few more paragraphs. In addition to the original photo and headline change (the original headline didn’t feature the important word “Some”), Blodget has written not one but three different updates to the post. One or two more and the updates will be as long as the post itself. 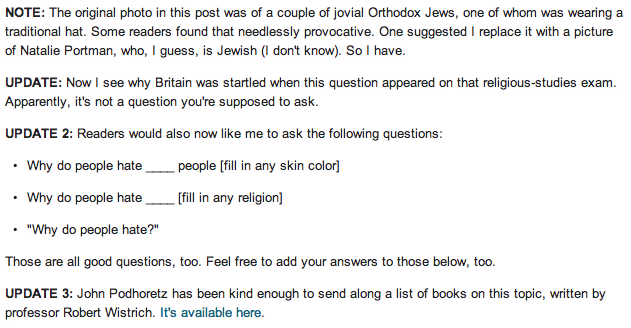 This brings us to a new question for our readers; What do you think the next Update will be? I’m guessing “UPDATE 4: I’m beginning to regret this post.”

SECOND UPDATE: The column is now on its third headline. Here’s how the evolution has gone (the original screen capture via Gawker).