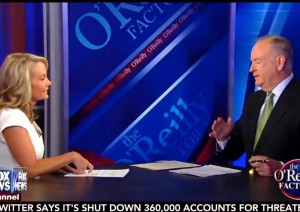 Bill O’Reilly challenged co-host of The Five Dana Perino, asking if her defense of polling data showing Trump behind was perhaps a manifestation of an anti-Trump bias.

Perino came under fire when she challenged fellow The Five co-host and Trump booster Eric Bolling for his attempts to dismiss all the polling data in favor of more truthy metrics like rally crowd size and social media followers.

In a series of tweets Wednesday night, Perino defended her decision to believe in polls rather than offer viewers some rose-tinted take on the data pushing a false narrative that the conservative candidate was in the lead.

[…] On election night when President Obama easily won reelection, I vowed to never put myself in that position again. I wouldn’t simply listen to what I wanted to hear. I would instead take the numbers for what they were, because the polling involved specifically in presidential elections has been accurate since 1952.

“The state of the GOP race right now is really bad,” she told O’Reilly, mentioning that Fox News viewers wanted her to stay optimistic in contradiction to the data.

O’Reilly noted Perino’s history of working with the Bush family, and asked about the “bad blood” between the Bushes and Trump. “Does that have anything to do with how you analyze Trump?” he asked.

“I do not think that by any stretch of the imagination it is right to tell people that just because he has really enthusiastic rallies that that means there is going to be a surprise and the polls are wrong,” she told O’Reilly.