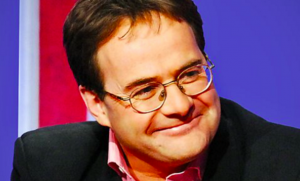 “When you tear out a man’s tongue, you are not proving him a liar, you’re only telling the world that you fear what he might say.”

Whose tongue are we referring to? Quentin Letts. Who’s Quentin Letts? A BBC host who, a few months ago, questioned climate change lobbying efforts by the UK’s MET Office (the country’s national weather service), interviewed two members of Parliament who opposed said lobbying efforts and mocked the historical accuracy of the MET’s weather forecasts in general, citing ample data to do so. And lest anyone believe Letts is some kind of extremist: he was named Columnist of the Year by the Press Awards, which is the Oscars of British Journalism. A transcript of the relatively-benign broadcast can be found here.

After that show which included his openly wondering aloud if climate change was strictly man-made, Letts went on vacation… not even giving any afterthought to the program from any of the hundreds of others the 52-year-old has done over the years. But while away, according to Letts, some of his co-workers reached out to warn him the broadcast had angered more than a few members of Britain’s green lobby.

OK, no big deal, some folks disagreed. That tends to happen in the broadcast business when controversial subjects are broached (as in…every minute of primetime in U.S. cable news). But instead of the usual angry tweets and emails being sent his way from those in disagreement, BBC management went the Orwellian route, launching an official inquiry into the broadcast. The result? Letts is charged with the crime of a “serious” breach of what the BBC deems as “rules on impartiality.” As a result, the broadcast has now been scrubbed from existence.

“Ladies and gentlemen, the Left had struck,” writes Letts in the Daily Mail. “I had been censored, expunged, deleted or ‘dealt with’, as RAF (Royal Air Force) types put it,” later noting:

The weird thing is, I don’t consider myself a climate change skeptic. Like, I suspect, the majority of the population, I don’t know what to think about global warming. I approve of action to reduce environmental waste and to increase renewable energy supplies, but do I think Man is to blame for the changing climate? I don’t know. I interviewed sceptics because they had something interesting to say.

No matter… the BBC isn’t having it, claiming it has a policy and instructed Letts that he wasn’t allowed to talk about climate change on his program based on said policy. Letts contends that warning never happened, nor having any knowledge of such a rule. But really, does it even matter? Since when should topics with varying points of view be banned in any capacity? We see censorship similar to this happening more in the U.S. as well, particularly on our college campuses: “Safe spaces” from dissenting viewpoints at Yale and muzzling of free speech at University of Missouri being prime examples in the past month alone.

But here’s the thing when it comes to climate change debate: it doesn’t have to be a matter of, “It simply isn’t happening,” or “It absolutely is and we’re doomed if we don’t do something about it now.” Debate can exist––amongst pragmatic people, anyway––about the degree of its effect on the planet: Are we in immediate danger/on the brink? Or is it an issue that can be addressed in a series of small steps over time? That’s a fair discussion to have. But instead, we get those controlling the debate presenting only the absolutist arguments from each side, which, of course, doesn’t advance anything.

You may have never heard of Quentin Letts before reading this column. Hopefully you have now. The BBC is an extremely respected organization with more history in the news business than pretty much any other out there on the planet… making this news of censorship that much more unsettling.

“Political correctness has crushed the individualism from our nation of once indignant eccentrics,” Letts once wrote.

And after you read what happened to him in the BBC’s vaporizing of a public broadcast, it’s impossible not to agree with him.