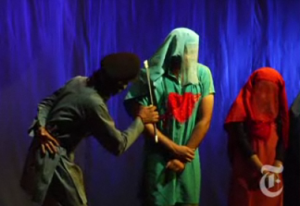 This morning, The New York Times published a fascinating article and video report about a satirical play entitled Burqavaganza that has been banned by the Pakistani government. While a story about an artwork that criticizes a tenant of Islamic fundamentalism getting in trouble in the Middle East sounds like it should be about as surprising as a headline touting the sky being blue, the idea that the play was performed at all and that there is debate over whether it should pe performed again seems downright hopeful in a country where people are calling for the death of Mark Zuckerberg.

The play, described as “a love story in the time of jihad” has become a rallying cry for extremist conservatives and liberals according to the report:

“The debate over the play is largely between two radical forces: Islamists, who are well organized and vocal in their condemnation of anything that challenges their values, and extreme liberals, who see their country as a secular democracy despite constitutional restrictions on speech and clear provisions about protecting Islamic values.”

The most irritating part of the account is that the people who called for the play’s ban had, like 99% of everyone who has ever tried to ban anything ever, never actually seen the play. Typical:

“Regardless of where one stands on the stageworthiness of “Burqavaganza,” the play’s outspoken critics, including senators and politicians of Islamic parties, have formed passionate public views about a play they have not seen, and a script they have not read.

Naeem Tahir, the former head of the National Council of the Arts, said the impulsive responses were evidence that public servants were catering to minority conservative forces, not on ideological or constitutional rounds, but instead out of fear.”

While the idea of banning a work of art is (or damn well should be) repugnant to all Americans, we shouldn’t feel completely superior in regards to stories like this. Religiously provocative works don’t always go over particularly well here either.

Below is the great video report. You can read the accompanying article here as well as go to the play’s official website here.