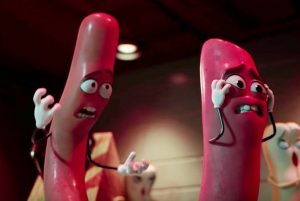 If you’re not familiar with the movie Sausage Party, congratulations for making it this far without hearing about the animated Seth Rogan film all about sexy food. Back in June, our own Dana Eisenberg wrote about the film, explaining that while the concept was raunchy and outrageous, “the good news for parents is that it’s rated R, so most kids probably won’t see it.”

Now that the movie is done terrorizing families across America, it’s moved over to France, where it has proven Eisenberg very, very wrong. According to the Daily Mail, it’s American R rating means nothing to Le Centre national du cinéma et de l’image animée (aka the National Centre for Cinema and the Moving Image), which oversees movie ratings in the country. They slapped a “12” rating on it, which means — you guessed it — anyone over the age of 12 can see the film.

Other prominent family-minded organizations in France have spoken out, as well, including a political party that is most well known for being against gay marriage.

Luckily, there is a silver lining, and it is this most excellent description of the movie from the Daily Mail:

Just make sure there are no 12-year-olds around, please.