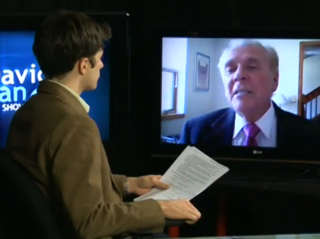 Pastor Paul Cameron is increasingly starting to believe that President Barack Obama is gay– and he has made no bones about alerting the press to this development. He expanded on his initial comments today on The David Pakman Show, whose host asked Cameron whether he had made the choice not to be gay. “I didn’t do that so much consciously,” he replied, “I reacted to my environment.”

Cameron reiterated first that he thought the President could be gay– wasn’t entirely sure, but could see the scenario develop. “I watch television and I have been impressed with how much homosexual content is in the public,” he complained, and noted that The Denver Post, that was “full of homosexual writers,” had praised the President. With a lament, he noted, “it’s homosexuality all the time.” He then brought up some examples of how homosexuality leads to pedophilia: “Harvey Milk we know for sure had least one relationship with a 16 year old boy” and “in countries where homosexuality gets a fair shake… Afghanistan or Pakistan, you have an enormous trafficking in children.”

He told Pakman that he did indeed believe that acting upon desires is a choice– the choice to dwell on a desire until it becomes an impulse. “Most men, if they will think about something sexual, they will try to do something,” he explained. “You’re a man; I’m a man, if a man thinks about something on his heart, by George, it’s amazing, most times he will get close to what he has to do.”

When asked by Pakman if he could be attracted to the host, he answered only, “at my age, it’s improbable,” but noted that “the culture, which was directed toward heterosexuality,” kept him from becoming gay after being raped at the age of three. With some effort, “by the time I was eight, nine, ten, I was thoroughly interested in girls.”

The interview with David Pakman below: